The new EPRDF administration opted for staying the course, cabinet ministers sworn in 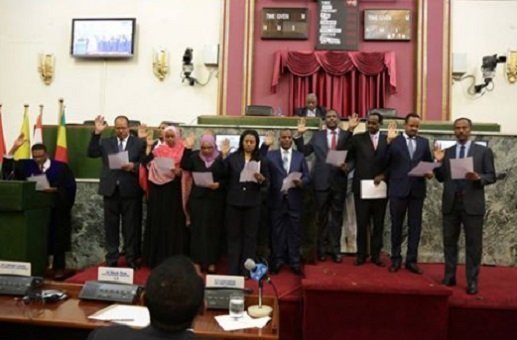 The new administration made it clear that it seeks to achieve quality service delivery through cabinet member changes which were introduced yesterday. However, as far as the Ethiopian people is concerned,the change seem to be too little.

Apart from opposing corrupt practices and red tapes in the public service, Ethiopians demanded fundamental economic and political change. And there was an apparent expectation that Abiy Ahmed’s administration will be at least a little different from the very system that Ethiopians have been living for more than 27 years.

As it turns out, Abiy Ahmed seems to be rather interested in staying the course. 16 ministerial appointments he introduced to the parliament, and they were all approved, demonstrates the case. Three of the new cabinet members are women but all the appointees have been part and parcel of EPRDF.

Visibly, the new cabinet sounds like it is “OPDOized” version of EPRDF in the sense that key federal government positions including foreign affairs, defense ministry, a federal prosecutor, revenue authority and of course the prime minister himself are from Oromo People’s Democratic Organization (OPDO).

Speaker of the house was fielded by an OPDO member until Abiy Ahmed announced today that Abadula Gemeda will have a new role as National Security Advisor for the prime minister.

How is the Ethiopian Opposition reacting to the “new” cabinet?

The Ethiopian opposition did not take long to figure out the new appointment; the view from that trajectory is that it does not represent change.

In an interview with VOA Amharic service today, Dr. Bezabih of All Ethiopian Unity Party (AEUP) says “I don’t believe that the new cabinet is a new cabinet.It is the role of the same people that is changing.”

“I have not seen anything changed from the usual EPRDF practice,” says the chairman of Blue party, Yeshiwas Assefa. He added that the focus on the part of the “new” administration seems to be rescuing the ruling coalition, not addressing the demand of the people.

Merara Gudina, leader of Oromo Federalist Congress who was in jail for more than a year before he was released after the regime in power decided to release selected political prisoners and journalists, says that “the change happened within EPRDF box”