The matter Abiy Ahmed got wrong in Mekelle 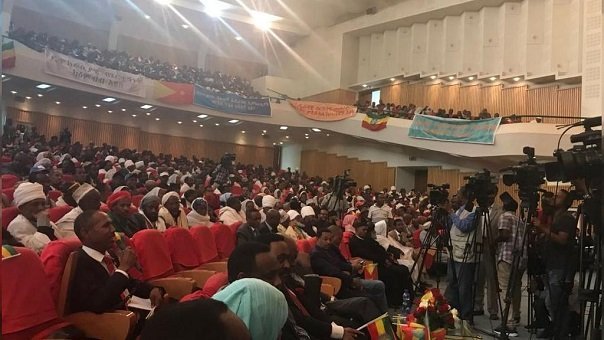 Abiy Ahmed, the new prime minister, has been to three different regions of Ethiopia in a matter of two weeks. He started his working visit in the country with Somali-Ethiopia, a region where unprecedented ethnic-based violence that displaced well over half a million Ethiopians. And then he visited Ambo, a town in central west Ethiopia that has been the bedrock of resistance to the regime in power since it took over power in 1991. And a few days ago, he was in Mekelle in Northern Ethiopia, part of the ethnic/political base of the dominant party in the ruling coalition, Tigray People’s Liberation Front (TPLF).

Out of what appeared to be long and arduous evaluative meetings of executives of the ruling coalition, the regime pronounced for the first time in its nearly three decades of rule that it needs to work on “unity” – of course without making a paradigm shift regarding the political foundation of the system, ethnic politics, for which a constitutional provision is arranged under the guise of identity politics.

Sold as a change maker who speaks with a tone that helps attain the task of uniting Ethiopia, Abiy Ahmed was celebrated until Ethiopians found out, in no time, that he actually is being consumed by the status quo to create the illusion that change is coming. He tries to talk authoritatively about a range of issues while the power is still in the hands of TPLF power elites.

From what we have seen so far, Abiy does not seem to stand for principle. He rather speaks to please his audience by speaking what his audience wants to hear. In Ambo, he hailed the youth movement, Queerro. It was pleasing to the audience as the movement was accused by pro-TPLF activists with links to the core of TPLF power elites as a movement modeled after Al-Shabab and with ambitions of terrorism. In Mekelle, where he spoke in Tigrigna, he borrowed the words of the late Meles Zenawi to tell them that “Tigreans are gold.” He meant to please Tigreans, clearly. No wonder that critical voices in the opposition media referred to him as “cocktail prime minister.”

His speech in Mekelle was worse.He went on to make a ruling, from the podium, on the issue of Wolkait, a region that used to be part of proper Gonder and was wrested to be part of Tigray soon after TPLF took over power in Addis Ababa. It is hard to imagine that Abiy Ahmed does not know that, beyond the question of land, Wolkait is clearly an identity question for which many have paid in lives. Yet, he dared to trivialize it as a non-issue orchestrated by what he called “diaspora whose livelihood depends on continuity of conflict.” His views beg a question if Abiy really has the intention to resolve the political crisis in the country.

The only good thing that Abiy spoke in Mekelle, albeit indirectly, is about the culture of theft of government resources which is often disguised in identity politics. His speech regarding the importance of developing honorable work ethics with a vision to serve the country is also something that needs to be seen in a positive light. The question is, again, if he capable of coming up with a policy initiative to overcome the social malaise with spill over to other realms of societal life.

Maybe it is still too early to throw away Abiy Ahmed as totally irrelevant for bringing about change. But it is time to send a strong message that Abiy is getting sensitive and important matters wrong and to remind him that he needs to watch his words and perhaps even better if he can talk less.