Why Abiy Ahmed should not be mistaken for change for now 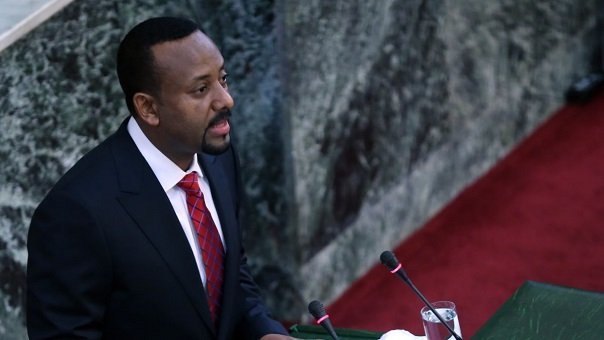 There have been numerous inaugural speeches in the Ethiopian parliament for the last twenty plus years and public attitude towards it was rather indifference. Abiy Ahmed’s inaugural speech on Monday represents a break from the recent past in that regard. It clearly got the attention of a considerable number of Ethiopians, in the country or abroad, irrespective of political convictions.

Abiy got Ethiopians talking obviously not because he has done things differently in Ethiopian politics or because he has real executive power to do so in the near future in view of firm control by TPLF but because he talked differently from politicians on things that matter to Ethiopians which is the Ethiopian identity – a subject that was tarnished and ridiculed by the Tigrean ruling elites for the last 27 years. Abiy’s rhetoric is apparently modeled after in speeches in the liberal traditions in the west. The non-stop applaud in the parliament that is entirely controlled by the ruling party itself was more like what Barrack Obama used to get in the Congress. Perhaps that is an additional reason as to why his speech was hailed by the increasingly westernizing youth with a pop culture and cheerleading sentiment (and this group usually tend to spice up its appearance with flavors of Ethiopian culture) in urban centers like Addis Ababa.

Oromo Ethno-nationalists have got something to celebrate in Abiy too; his ethnic identity, Oromo, albeit it is not hard to imagine that the radical group, which seem to have a significant grassroots support base in the ethnic Oromo regions of Ethiopia, could be antagonized to Abiy Ahmed due to the nationalist tone during his speech. Earlier in the week, he was already projected, erroneously, as the first ethnic Oromo prime minister in international media outlets and Aljazeera seem to be an expert in ethnicizing Ethiopian politics; records in Ethiopian history, however, suggest that he is actually the third ethnic Oromo prime minister. Since ethnic politics is the power base of Abiy, it is not hard to speculate that Abiy will be somewhat, at least, restricted by ethno-nationalists to take political measures that will convince Ethiopians who do not care about ethnic identity or Ethiopians who do value Ethiopian identity more than ethnic identity.

Although Abiy Ahmed’s words from his inaugural speech were appealing to most Ethiopians with nationalist convictions, it is apparent that there is a good dose of scepticism. For a reason.

What seems to be celebrated, from the point of view of most Ethiopians, regarding the process and the outcome of the process is that TPLF didn’t get its way in terms of deciding who gets to be a prime minister this time around. Clearly, Abiy Ahmed was not TPLF choice; the party even wagged unsuccessful social media propaganda campaign to paint Abiy in a negative light.

However, the fact that TPLF emerged politically dead out of the internal struggle does not make Abiy an embodiment of change; it is not right to think so at least at this point in time. Abiy did not run with a different party platform. He will rather be executing the party programs and has sworn in to be loyal to the constitution on which the ethnic-based federal and regional structure is hinged.

More so, the party has made it clear that it sees Abiy’s take over of Hailemariam’s position rather as an appointment, the Tigrean elites even use the language “assignment.” It is also important to remember that Abiy will be working within the existing government structures and it is a public knowledge that important arms of the federal government are still under the firm control of TPLF.

That is not to say that Abiy does not have a chance to develop the thoughts he expressed during his inaugural speech into policies and implement them thoroughly. But it takes, among other things, deepening and broadening the alliance within the ruling coalition so that he could be in a position to bring about institutional and macro-structural changes. Broadening the power base is, in fact, essential for Abiy and his team within in Oromo People’s Democratic Organization so as to fight radical ethnonationalism unless they want it for the time being as a playing card to bargain more power in the name of Oromo people.

Abiy also seems to have another comparative advantage to lead the change from within in that major powers in the west are responding positively to his promotion as prime minister. Herman Cohen, a retired US bureaucrat who used to be a champion of TPLF, overtly encouraged Abiy to be bold in taking reform measures. Canada is encouraging Abiy to take economic and political reform measures.

Since Ethiopia is located in a region that is increasingly becoming a contesting ground for major powers to get a sphere of influence, cultural and economic, it is inevitable that the seemingly pro-Abiy stance from the west will have its own influence in the way political dynamics in Ethiopia is evolving.

The faith we put on Abiy for now has to be well measured. Even if he is taking some impressionist political measures by releasing political prisoners and lifting the state of emergency, which is unlikely to happen without the “benevolence” of TPLF, in the first few weeks of Abiy’s time as prime minister, it is too early to think that Abiy represents change. There is much to be done for change to happen in Ethiopia and that is why the struggle should rather be intensified.