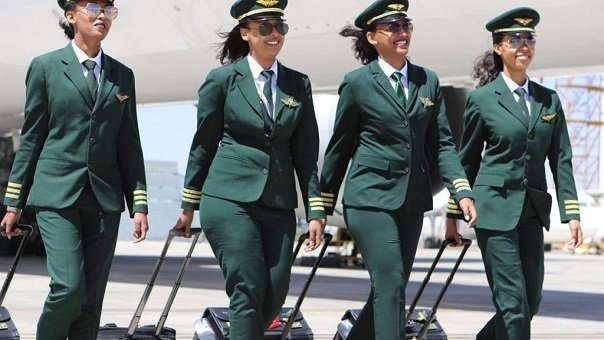 All Female crew was dispatched for inaugural flight to Buenos Aires on the occasion of International Women Day, March 8.

The 70 years old Ethiopian Airlines, which is Africa’s largest airline group, disclosed on March 8 that it is commencing five weekly flights to Buenos Aires, the second largest city in Latin America.

Tewelde Gebremedhin is quoted as saying :

“Our new flight to Buenos Aires will provide efficient connections to our network in Asia, the Middle East, and Africa, including Beijing, Shanghai, Seoul, Tokyo, Mumbai, Delhi, Dubai, Beirut, Nairobi, and Cairo.We are all the more happy that the flights will be launched on 8 March, International Women’s Day. To mark this important occasion and as part of our commitment of mainstreaming gender into our core business, we have made the inaugural flight on 8 March an All Women Operated Flight.”

Ethiopian Airlines has more than 100 destinations across five continents.

In the near future, the airlines anticipate commencement of direct daily flights to Moscow as Russia has reached an agreement with Ethiopia when Sergey Lavrov visited Ethiopia last week.

Ethiopian Airlines (Ethiopian) is the fastest growing Airline in Africa. In its seventy plus years of operation, Ethiopian has become one of the continent’s leading carriers, unrivalled in efficiency and operational success.

Ethiopian commands the lion’s share of the pan-African passenger and cargo network operating the youngest and most modern fleet to more than 100 international passenger and cargo destinations across five continents. Ethiopian fleet includes ultra-modern and environmentally friendly aircraft such as Airbus A350, Boeing 787-8, Boeing 787-9, Boeing 777-300ER, Boeing 777-200LR, Boeing 777-200 Freighter, Bombardier Q-400 double cabin with an average fleet age of five years. In fact, Ethiopian is the first airline in Africa to own and operate these aircraft.