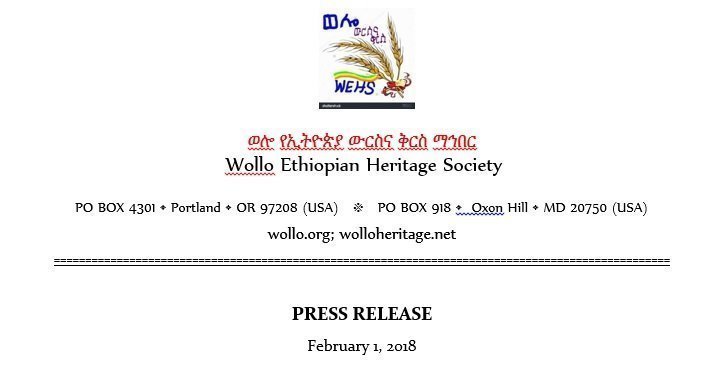 Wollo Ethiopian Heritage Society (WEHS), a rights-based civic organization, is shocked and saddened by the brutal killings and mass arrests of peaceful demonstrations in several towns in North Wollo during and after the annual Epiphany celebrations. We are at the same time encouraged by the civil disobedience well underway to finally remove the 27year-old, tyrannical, and supremacist Tigrean People’s “Liberation” Front (TPLF).

The facts in these fast-developing events of the past two weeks are clear enough:

• That the entire Dessie-Alemata corridor is in a potentially explosive situation is indicated by the massive mobilization of the security forces in this sub-region of Wollo which contains some 3 million residents.

The bottom line is that Wollo, Gonder, and Gojam have now fallen into a de facto emergency military rule. The civilian population is being subjected to warrantless searches, illegal house-to-house searches, preemptive mass roundups, indiscriminate assassinations, and confiscation of property—all done with impunity by crack troops trained in a diet of ethnic hatred and intolerance for any signs of dissent.

The underlying grievances of the mercilessly oppressed people of Wollo are ones that are widely shared by all regions of Ethiopia. The ruling TPLF regime is irremediably ethnicist, militarist, anti-Ethiopian, and totalitarian. For the past 27 years, the clique has acted as a foreign occupation force by insulting Ethiopian nationalism, especially but not exclusively targeting the Amhara for ethnic cleansing and genocide, meting out gratuitous violence and psychological torture to instill fear as a method of internal colonial rule, and looting public assets to build its proclaimed “home base” of Tigray and to enrich its core supporters.

The people of Wollo needed only a spark or two to engage in wide-ranging civil disobedience against the capture of their church and mosque, business centers, and local administrative institutions by the agents of the much-despised regime. They are also emboldened by similar defiant movements of popular resistance calling for a total systemic and regime change in Gondar, Gojam, Shewa, and large parts of Southern Ethiopia.

This is clearly the beginning of the end of an odious regime. We must brace ourselves for a tragedy preceding the end at least this dictatorship. To their credit, the savvy resisters have targeted the regime’s economic centers, military bases, and extensive networks of local spies. The struggle must, and will be, sustained. However, we should all be deeply worried that the calamity of the past two years may sooner than later turn into a catastrophe with the massive militarization of society.

WEHS, therefore, asks with a great sense of urgency:

7) Notable elders of all faiths to speak out publicly and courageously in defense of the internationally-recognized rights of all Ethiopians, and thereby pave the way for peace and national reconciliation.

On behalf of the families of the victims, we wish to thank all who have expressed their outrage publicly, are undertaking solidarity marches and strikes, and have initiated fundraising campaigns. Please work with us to ensure proper targeting and accountability of the financial support. Thank you!

We stand fully behind the courageous people of Northern Wollo in their darkest hour!
The struggle for a united, democratic Ethiopia shall triumph against all the odds!