Ethiopia : Cutting a Deal With the Wounded Beast (Part III) 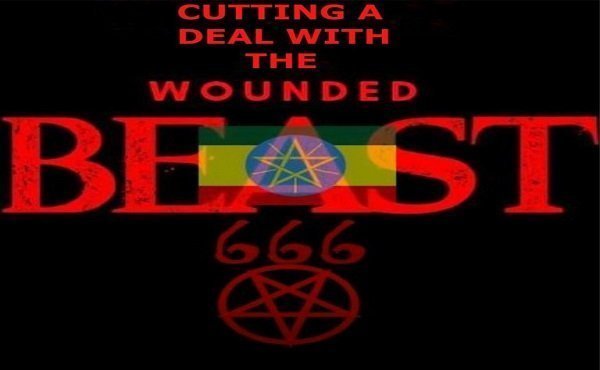 Author’s Note: This is the third installment in a three-part series on prospects for “mediation”, “reconciliation” and “negotiation” with the ruling Thugtatorship of the Tigrean People’s Liberation Front (T-TPLF). I have explained the purposes of the series in the Author’s Note of Part I and Part II.

In Part III here, I aim to sketch out the general outlines for a national reconciliation process in Ethiopia which I hope will evolve into a roadmap for genuine truth and reconciliation.

The series on truth and reconciliation in Ethiopia will continue indefinitely.

I had initially anticipated that I could sketch out my views in three commentaries, but indeed had underestimated the task. Given the enormous importance of the issue, I have decided to continue the series indefinitely with the aim of providing civic education and sharing my views on truth and reconciliation to my readers and all Ethiopians.

I dedicate the series to all of Ethiopia’s youth that have made the ultimate sacrifice to free their country from minority ethnic apartheid rule and those struggling, going to jail and dying every day to establish a democratic society based on the rule of law.

I also intend the series to be a trifling memorandum to history recording that I did what little I could with my puny pen to help guide the Ethiopian people avoid civil war and achieve civil peace; to abandon the path of revenge for the path of reconciliation; to find justice in truth and truth in justice; to choose the Beloved Community Martin Luther King talked about over the land of hate and wrath Ethiopia has become under a ruthless thugtatorship.

Special Note: I hear complaints from some, from time to time, that my writings are too long and difficult to understand. I am urged to keep them to a few hundred words.

I respectfully ask those who complain about the length of my commentaries not to read or even attempt to read them. I am not writing for the inquiring minds of the National Enquirer. I am writing for those who have inquiring minds about the Nation of Ethiopia! I urge those having difficulty reading and understanding my prose to try a little harder. I am also aware that there are some who cannot handle the naked truth and feel sandblasted by my commentaries every week and want me to stop writing. If they stop lying about Ethiopia, I will stop telling the truth about them.

For me, speaking and writing about Ethiopia and the Ethiopian people is a passion, a sacred duty for which I have been divinely blessed. I write not only for the present generation but also generations to come. These are my chronicles of the time of pain and suffering of the Ethiopian people as I have observed them from a very long distance. But time and space do not mean much to me when it comes to Ethiopia. Suffice it to say, you can take the boy out of the country and keep him away for one-half century, but there is no way on earth you can take the country out of the boy even if you announce on international radio that you have “doubts about the Ethiopian-ness” of that PROUD boy.

I am filled with unbridled optimism about the future of Ethiopia. In July 2012, I wrote about my “Dreams of an Ethiopia at Peace”. In January 2017, I issued an appeal to all Ethiopians to “Dare to Dream With Me About the New Ethiopia in 2017”. Today, peace is at hand and the twilight of the nightmare of ethnic apartheid is visible over the horizon under the shimmering glow of Ethiopiawinet.

“A luta continua… … A vitória é certa.” (“The struggle continues… …victory is certain”.)

No people [in the world] will remain smothered, meaning oppressed, for ages. It is [a] universal [truth]. No people, to the extent that they are people [human beings] and [as evident] in world history will not remain [like an inanimate object] in one place, they will not stay put in one place as one [an oppressor] may want them. When they [people] become very bitter, they explode. This is a universal truth. There are no people who will not rise up when they become bitter [can’t take it anymore]. Historically. Now. And in the future. — Aboy Sebhat Nega, T- TPLF czar, mastermind, kingpin, godfather, guru, power-behind-the-throne and capo di tutti capi (boss of all bosses) (2015).

Could there be reconciliation when “there is no government” (“mengist yelem”)?

____
Send article submissions to editor@borkena.com ; we will be very pleased to feature it.