Egypt and Ethiopia talking Nile again after disagreement in September 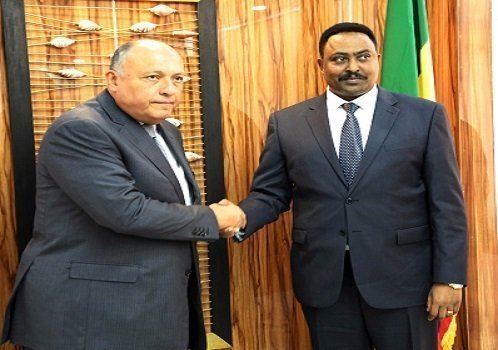 Ethiopian Ministry of Foreign Affairs called the meeting “ministers’regular consultation” but the ministry did not give much detail about the agenda items.

However, as is known to the public, Construction of Grand Ethiopian Renaissance Dam (GERD) has been the top agenda item in the bilateral talk between the two countries.

The issue of Nile generated a great deal of friction between the two countries in recent months. 86 percent of the volume of Nile water originates from Ethiopia but Egypt has been trying to push colonial time agreement on Nile down the throat of Ethiopia but Ethiopia is not a party to the colonial time agreement. Yet, Ethiopian authorities offered investment incentive for Egyptian investors in Ethiopia.

After the Cairo trilateral talk regarding impact assessment of GERD between Egypt,Ethiopia and Sudan failed in September of this year, Egypt did try to appear as intimidating when president Abdul Fetah Al-Sisi declared “water(Nile) is a matter of life and death.” Ethiopian authorities replied in kind when they employed same language to emphasize that the dam project is more than a priority : the issue of Grand Renaissance Dam is a matter of life or death.

Now the stern warnings from the two sides seem to be waning and the tone is more diplomatic. Ethiopian Ministry of foreign Affairs wrote “Foreign Minister Sameh Shoukry noted the outstanding commitment the Government of the two countries has displayed to further bolster the longstanding and ever growing bilateral ties” in its news update today.

The Egyptian foreign minister is cited as saying that “Declaration of Principles (DoP)” over the use of the Nile water in “equitable and reasonable manner” as a manifestation of “unflinching position the two countries show to take the ties to a higher gear through utilization of a trans-boundary resource.”

In the past, Ethiopia was also accusing Egypt of meddling in the internal affairs of the country by supporting ethno-nationalist elements.