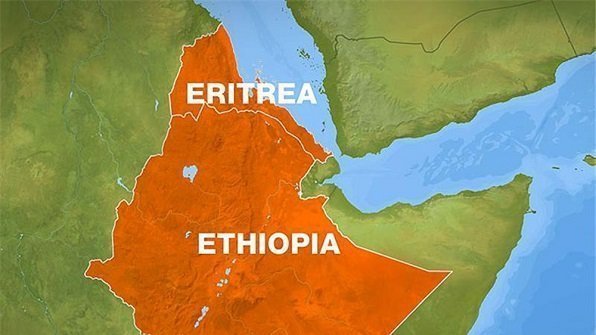 As rerun of some Ethiopia’s quarter uneasiness on Eritrea, Addis TV, a media center from the capital of the fragile federal republic, continues disrespecting Eritrea’s country status. In its business break logo, Addis TV revives using the one ‘Eritrea-Ethiopia’ cartographic presence, a move that disqualifies Eritrea as independent nation.

Being one of the amplifying apparatus for the Ethiopian government after the state-run EBC, Addis TV again broadcasts its business briefings with this ‘un-separated’ Eritrea cartographical presentation on its going on coverage. This TV center which has, undoubtedly, opted working on smashing Eritrea’s territorial integrity, is renowned in Ethiopia for abandoning critical issues of the country, including to recent confrontation between Somali and Oromo ethnic regions peripheries and disorder in different universities.

It is recalled that Addis TV’s provocations is not new phenomena but a continuation of such notorious missions by Teddy Afro, a controversial singer, and Shaleka Dawit Weldegiorgis, ex-high official of the Dergue military era. Spearheaded by founder of Arena, Ghebru Asrat, those individuals and others have been dismissing Eritrea’s country status and are exerting their efforts to use the Red Sea country as alternative scapegoat.

HorMid Art and Media Center archives testify of such early movements back in January 1993, preparatory time for Eritrea’s national referendum. Back then, ‘የኣፍሪቃ ቀንድ (Horn Africa)’ and ‘መስታዎት (Mirror),’ both magazines from Addis Ababa, intensified their media campaigns against Eritrea’s highly epitomized readiness for holding referendum in April 1993. Resultantly, the magazines played vital role in instigating protests by a few students in Addis Ababa University, an incident that led to specific crackdown by the late Meles Zenawi and TPLF members.

Addis TV and its collaborators efforts are, indeed, in direct violation of the internationally recognized national and sovereign rights of Eritrea. The border between Ethiopia and Eritrea that was defined in a series of agreements in 1900, 1902, and 1908, has been archived in Istituto Italiano per l’Africa e l’Oriente center and testifies Eritrea’s status as sovereign and independent country, not as what Addis TV and other quarters are hallucinating to be.

Yosief Abraham Z is a freelance journalist and Executive Director of HorMid Media and Art Center. You can contact him at josiabraham29@gmail.com

For more, check out Madote