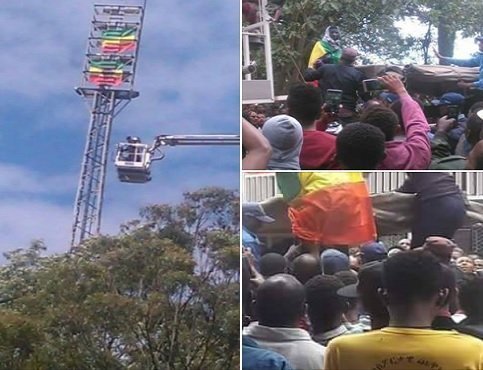 A young loner Ethiopian who dared to wear and hoist Ethiopian flag, “constitutionally” outlawed by the current Ethiopian government, from the top of a stadium light tower this morning in the capital Addis Ababa was arrested by security forces.

He was wearing two flags on the top of the Floodlights tower. He resisted to come down when security forces told him to do so and they had to use fire department trucks to reach him (see photo above).

The identity of the person, whom Ethiopians in social media are dubbing as brave, is not yet released. Given the violent and cruel records of security forces, the loner took a great deal of risk in undertaking what he did.

While it is clear that the person is in custody, probably already living torture, no information emerged so far as to where he is detained.

Among the many differences that the current government in Ethiopia has with the rest of Ethiopians is flag as the government imposed a new one by repressively outlawing the Ethiopian flag many millions of Ethiopians cherish. And Ethiopians seize moments to hoist the flag they cherish which often leads to a collision course with security forces who are in the service of TPLF elites.

The major difference between the Ethiopian flag and the flag introduced by the current government’s flag is that the later has a sky blue color with a pentagram (which happens to be distasteful for many) on top of the original Green, Yellow and Red tricolors.

history of the Ethiopoian flag

Fascist Italian invaders outlawed the Ethiopian flag, just like TPLF government, during their five years of occupation of Ethiopia.

Of course, the imperial government of Ethiopia under emperor Haileselassie and military government under Colonel Mengistu Hailemariam added their own emblem on top of Ethiopian flag but the green, yellow and red flag was always revered, let alone to be outlawed.

Many African countries were inspired by the resistance of Ethiopia against fascism and adopted Ethiopian colors as their flags in different forms.

Ethiopian government goes to the extent of linking Ethiopians who rather like the former Ethiopian flag as ultra right and “terrorists” while imposing its own flag on Ethiopians.

No one in the government seems to be capable of explaining as to why Ethiopians have to abandon the very flag that patriots carried when resisting foreign aggression.