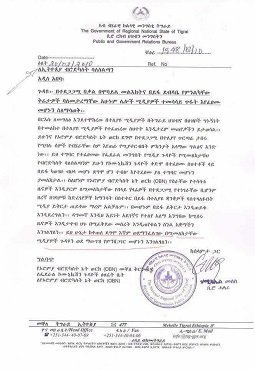 In a letter sent to Ethiopian Broadcast Authority, which is a federal government agency, Tigray region Public and Government Relation Bureau requested that Oromia Broadcasting Network (OBN) officially ask apologies for the way they covered stories.

What the Tigray regional state considers to be a problem is that OBN disclosed the names and ethnic identities of suspects in its news report. Indeed, Oromia Media Network disclosed identities of suspects in connection with recent violence in South West Ethiopia. As well, the letter seems to be making reference, implicitly, to news about the seizure of smuggled coffee in Bedelle this week and the confiscation of forign currency which was reported as having been in circulation illegal in the border towns in the south. Another incident when names of suspects was disclosed was in connection with arrest that the police in Oromo region of Ethiopia made in Illubabor.

The letter says that the purpose of disclosing the identities of the suspects is “clear” but did not point it out. Coincidentally, names disclosed by OBN inconnection in the coverage were of Tigray origin, at least they sound that way. And the region of Tigray must have understood it as an ethnic profiling.

Last week, Federal Government Communications Minister, Dr. Negeri Lencho, was blackmailed by head of Ethiopian Broadcast Authority for his remarks regarding Buno Bedelle Zone conflict coverage by Ethiopian News Network (ENN) and Zami radio. He said, during a press conference on the situation of Ethiopia, that he watched the coverage by ENN in relation to Buno Bedele conflict and thought that it was covered in a way that aggravates and misrepresent the conflict. Even though Dr. Negeri spoke in his ministerial capacity as Communication Affairs Minister, head of Ethiopia Broadcasting Authority (an agency) dismissed Dr Negeri Lencho’s official statement as a “personal opinion”

Eleven innocent civilians are killed during conflict last week and thousands were displaced.
__
Join the conversation. Like borkena on Facebook and get Ethiopian News updates regularly. As well, you may get Ethiopia News by following us on twitter @zborkena