I teach and write about public health in Africa. For years, something about Uganda stumped me.
Since 2000, health services have improved in most African countries, but Uganda’s progress lags. Yet Uganda has a remarkable medical history. Well before colonial times, the Baganda, Uganda’s largest tribe, could distinguish plague from smallpox; Baganda traditional surgeons performed caesarean sections in the 19th century, when Europeans considered them too difficult and dangerous. During the 1950s and ’60s, Ugandans helped pioneer treatment for childhood cancers and malnutrition. When Singapore was looking to reform its health system in the 1960s, it sent a delegation to Uganda.

Today Uganda’s health system is a shambles, even though American taxpayers plow hundreds of millions of dollars annually into medical projects there. Bats, snakes and other wildlife have taken up residence in once-functioning rural clinics. Uganda’s children die at twice the rate of those in neighboring Rwanda and Kenya, and those who survive are among the least likely in the world to complete elementary school. The main referral hospital is so dysfunctional that women giving birth there are seven times more likely to die than when Idi Amin was Uganda’s president in the 1970s. Meanwhile, Uganda’s government spends $150 million a year flying the president and other elites out of the country when they need medical treatment.

It’s become clear to me that corruption, combined with the government’s callous indifference to the plight of ordinary people, explains these problems. But why are the U.S., the World Bank and other donors still pouring our tax dollars into this terrible government?

After seizing power in 1986, Ugandan President Yoweri Museveni formed a security relationship with the U.S. that has lasted through five administrations and seems to be holding strong under President Trump. In exchange for billions of dollars in economic and military aid, as well as powerful diplomatic support, Museveni has served as our proxy warrior, sending his troops around the region to weaken or topple other governments, particularly Islamic ones.

In return for a handful of military favors, America has tolerated not only Museveni’s craven rule in Uganda, but also the chaos he has sown throughout the fragile region of eastern and central Africa.

In 1990, Museveni backed the rebel invasion in Rwanda that triggered the genocide there four years later. He wasn’t following American orders, but the George H.W. Bush and Clinton administrations did nothing to stop him.

America has tolerated not only Museveni’s craven rule in Uganda, but also the chaos he has sown throughout the fragile region of eastern and central Africa.

Around the same time, Museveni obliged Washington by funneling weapons to Sudanese rebels fighting their hard-line Islamist government. The war was brutal, its outcome disastrous. Breakaway South Sudan is now mired in civil war, with Museveni propping up its leader, whose army has been accused of genocidal acts against minorities.

In 1996, Uganda with Rwanda (now led by Museveni’s allies) moved to oust Zaire’s Mobuto Sese Seko, installing a new dictator and precipitating two wars that killed millions. The Clinton administration not only greenlighted this march of folly, it also supplied equipment and training to brutal invading commandos. It turns out Mobutu had been making overtures to the Islamists in Sudan, and the U.S. likely wanted to ensure Zaire’s (renamed Congo in 1997) wealth of minerals — diamonds, gold, uranium, cobalt and coltan used to make cellphones — wouldn’t fall into the wrong hands.

After the disastrous 2006 U.S.-Ethiopian invasion of Somalia, Museveni alone among African leaders sent peacekeepers to the ravaged nation. Instead of wiping out Islamic militants, the U.S. had undermined a moderate government and radicalized the youth militia Al Shabab, which went on to join the Al Qaeda network. America still relies on Ugandan troops to fight Shabab terrorists, which explains why we turn a blind eye to Museveni’s abuses to this day.

In 2013, I met a remarkable Ugandan named Lawrence Kiwanuka Nsereko, who now lives near where I teach in upstate New York. Nsereko has been fighting to bring democracy to his country since he was 14 years old. In Uganda, he was a child soldier, a newspaperman and a political candidate. He’s seen his newspaper’s office ransacked, his party headquarters torched, his friends and colleagues killed. He was arrested, tortured and nearly assassinated.

Nsereko helped answer my question about Uganda and the donors, and he also helped me see that Ugandans cannot free themselves from Museveni’s corruption and warmongering on their own.

They’ve tried mightily: Just last month, exasperated Ugandans launched a campaign to thwart Museveni’s latest plan to extend his 31-year grip on power. Called Togikwatako, meaning “Don’t dare touch it!” (a well-known parental warning in the vernacular), it refers to a clause in Uganda’s Constitution limiting the age of the president to 75. Museveni claims to be 73, and he has no intention of leaving office in two years. After one of his henchmen presented a bill in Uganda’s Parliament to scrap the age limit, Togikwatako demonstrations erupted across the country. Security forces responded with bullets, batons, tear gas and whips fashioned from the strips of car tires.

Courageous opposition members of parliament, and even members of Museveni’s party, tried to filibuster the debate on the age-limit amendment by singing the national anthem over and over. Eventually a chair-throwing brawl broke out, and Museveni’s plainclothes hit squad forcibly arrested nearly 30 Togikwatako MPs. Two of Lawrence’s friends were injured: Kampala Mayor Erias Lukwago, whose testicles were crushed by police as they arrested him, and lawmaker Betty Nambooze, now on crutches.

To many Americans, Africa’s conflagrations must seem like distant bonfires having nothing to do with us. When we care at all, we throw up our hands at “ethnic conflicts” and send humanitarian aid. But Nsereko knows — and now so do I —that we can do far more because our government is propping up the architect of much of the pandemonium.

“Museveni is like a giant tree that kills everything in its shadow,” he told me. “Get rid of it, and good things will begin to grow.”

As we examine America’s commitment to democracy and human rights, its military actions, and the racism that has haunted it since its founding, we should also reckon with our treatment of Africa. The lives of its people matter too. 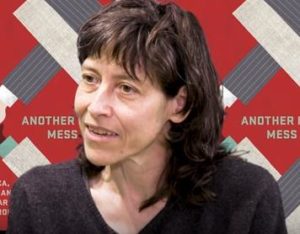