The Cracks in Ethiopia’s Federalism are getting larger 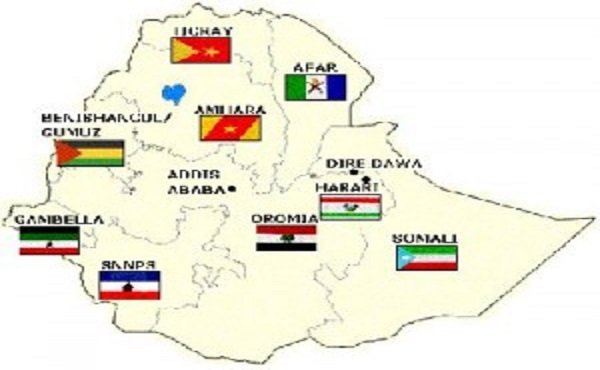 As a nation, Ethiopia today is divided in pieces, the way the victorious liberation lads wanted it. Their vision was, I assume, to create a Switzerland styled federal state but with something extra…chuzpah!

They, of course did not take into account all the rivalries among Ethiopia’s diverse peoples and regions. They did not realize that the devolution of power to the regions will strengthen the dominant nationality in each. They did not realize they lacked the necessary wisdom and experience to lead a complex nation like Ethiopia. So here we are today with an Ethiopia, beleaguered by ethnic nationalism and dissatisfied youth.

Now, people often ask “what else could they have done?”
[adToAppearHere]
It may have been challenging to find a solution to the enormous problems Ethiopia was facing at the time. But the option imposed by the victorious powers in 1991 was absolutely not in the interest of Ethiopia. The three main problems of the 20th century Ethiopia were poverty, inequality and lack of political representation. The partitioning of the country along ethnic lines was, therefore, a price the country has to pay to TPLF to win its ‘wholeness’. It was presented as the only possible path to peaceful development and ‘stronger unity’, when in fact it was a precursor to its disintegration.

If we want to look at history for lessons, we know that dividing Ethiopia up is not the solution; it would in fact only help to kick-start another long-term human tragedy, with Ethiopia’s population paying the cost. Knowing all this, if these proposed solution are not in the Ethiopians’ favor, who would then be the true beneficiary of a “new Ethiopia” segmented and splintered along ethnic lines?

Figuratively speaking imagine someone taking a person’s brain apart and lay out the neurons, vessels, white matter, etc. side by side on a very large table, and expect the disassembled brain (parts) to be greater than the whole brain. Actually, as parts, nerve cells can’t do much of anything….If you know what I mean!

Today ‘new’ national questions are reemerging in their most extreme forms (secession, irredentism, or the expulsion of minorities) at a time when the federal government’ remains unable to reform the country. Unfortunately, once these disruptive positions continue to solidify, their proponents could not abandon their commitment to their particular solution, making the pursuit of peace and prosperous stability unattainable.

Indeed, the massacres of innocent lives and the resulting ethnic cleansing that we witnessed in the last weeks are just strong manifestations of political disintegration. There is nothing ancient or indigenous about sectarian and ethnic conflict in Ethiopia. The killings of a particular group of people i.e. Somali, Oromo, Amhara etc. is the result of relatively recent conditions created by corrupt governance and the destruction of much of the fabric of Ethiopia’s national society. This government has created the conditions for our societal failures. It has, deliberately or not, allowed systematic actions and in-actions that has led and is leading to the callous massacre of ETHIOPIANS.

Confronted to the tragedy, the Prime Minister tried to suggest, that this was a border crisis between Oromos and Somalis and to present itself as a peace maker, I find it height of hypocrisy. For God’s sake what we have witnessed in South-East Ethiopia is a civil war, Ethiopians killing Ethiopians!!

We’re heading towards an abyss… and no one cares. Certainly, we don’t care. People get what they deserve.
How long can this go on?

We don’t know for sure. But we know at some point, though, the gods stop laughing… and tomorrow comes. So stop on relying on verbal attacks on this and that group in general, stop using selective repression on the most radical nationalists, and stop introducing the deterrent effect of the specter of military interventions. Those will simply not be enough.

A crisis is an opportunity.

The government and the party may control many things… but not everything… A national inclusive and transparent political renewal is in order.

Wake up, before it’s too late!

___
Editor’s Note: “The Cracks in Ethiopia’s Federalism are getting larger” article was first shared on the facebook page of Kebour Ghenna, this afternoon. With ethnic clashes, in fact, internal border war has become a trend, as Kebour Ghenna asserted, consuming Ethiopia, the ruling elites seem to have no intention to rethink the existing ethnic-based structure and think in terms of national unity. And the future is unquestionably disastrous if something is not done to avert it. It is because of this reality that the writer’s “Wake up, before it’s too late!” is timely.