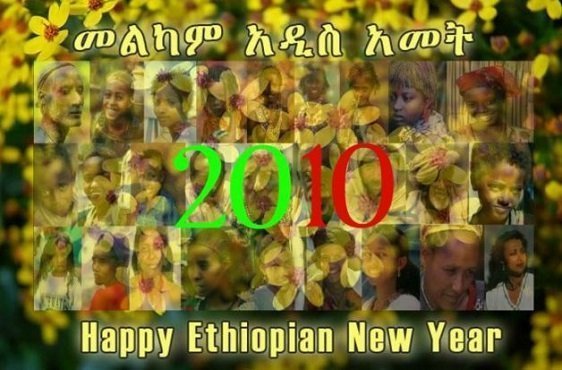 Let us look forward happily to the new year with confidence in our hearts and resolve in our minds. Let us learn from the lessons of the past year and apply them even more magnificently in the new. Those great lesson are mass civil disobedience and nonviolent resistance to T-TPLF black apartheid rule.

Let us make history in 2010! Let’s make sure the T-TPLF (Thugtatorship of the Tigrean People’s Liberation Front (T-TPLF) the ash heap of history.
[adToAppearHere]
Every year, for the past several years, I have issued a New Year’s message to my Ethiopian readers and all Ethiopians throughout the world. It is a special and unique privilege and honor I have earned through nearly 12 years of relentless and uninterrupted weekly advocacy (occasionally multiple times a week) in defense of human rights, good governance, democracy and the rule of law in Ethiopia.

As I look back, I prefer to think of 2009 in Dickension terms.

Of course, Charles Dickens was telling “A Tale of Two Cities” set against the French Revolution and the Reign of Terror and life in exile in England.

2009 was the best of times. A time of civil disobedience and nonviolent resistance. The people of Ethiopia, particularly the young people, stood up in nonviolent resistance to the T-TPLF and said, “Enough of black apartheid dictatorship. We demand democracy, human rights and the rule of law, NOW!”

2009 was the worst of times. Thousands of innocent political prisoners remained in the torture dungeons of the T-TPLF. So many of them to list by name. The T-TPLF massacred, maimed and jailed thousands of innocent Ethiopians and today holds captive at gun point 100 million people. I remember Eskinder Nega, Andualem Aragie, Merara Gudina, Bekele Gerba, Woubshet Taye, Andargachew Tsgie, Kalid Mohammed Ahmed, Darsema Sori Banqash, Demeke Zewdu… and the hundreds of thousands of political prisoners in Ethiopia.

2009 was a year of wisdom. Ethiopians came to understand the undeniable truth that united we stand, divided we fall, for the wily tricks of the T-TPLF. I say, all for ONE Ethiopia and ONE Ethiopia for all.

2009 was the year of foolishness for the T-TPLF. The T-TPLF foolishly thought they could suppress the Ethiopian people’s struggle against black apartheid oppression by issuing a state of emergency edict. They merely covered with sand the slowly burning fuse attached to the T-TPLF powder keg. The contemptible and arrogant T-TPLF tried to do a con job on the people by promising to rename the country’s capital “Finfine” while stealing in broad daylight the lands of struggling farmers. The wise people did not fall for the T-TPLF’s foolish tricks.

2009 was the epoch of belief. The people of Ethiopia came to believe in their hearts and minds that the black apartheid regime of the T-TPLF gotta go; go away and come back never; go to hell, hell, hell!

2009 was the epoch of incredulity. The people of Ethiopia found the incredibly powerful weapon of nonviolent resistance and mass civil disobedience to fight the black apartheid regime of the T-TPLF. In one year, they brought the T-TPLF down on its knees with nothing more than a defiant, “Hell, No! T-TPLF black apartheid rule gotta go!”

2009 was the season of light. The people of Ethiopia were able to see bright sunlight at the end of the long and dark tunnel built by the T-TPLF over the past 26 years.

2009 was the winter of despair. It was “the winter of our discontent, made glorious spring and summer by Ethiopia’s young people.” In 2009, “… all the [tyrannical] clouds that low’r’d upon our [Ethiopian nation] house/ In the deep bosom of the ocean buried.”

2009 shall go down in history as the beginning of the end of the “House of the T-TPLF” which handmade “miserable Ethiopia”.

A victorious and glorious 2010 awaits!

As I have asserted on previous occasions, I believe it is unquestioned that I am Teddy’s #1 fan anywhere, any place. I have threatened to arm wrestle anyone who dares to challenge me for the #1 spot.