Ethiopia: Mayday (S.O.S.) in August for the T-TPLF! 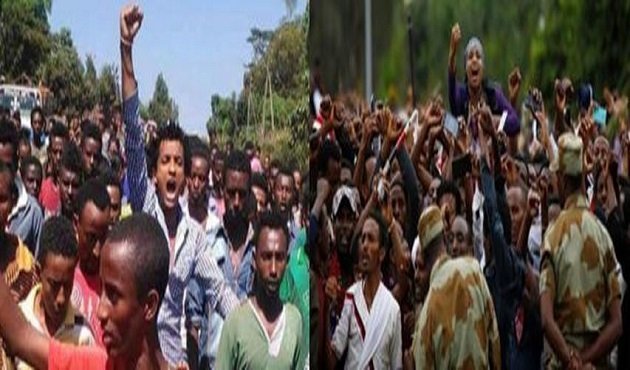 “These perpetual little panics of the French – which all arise from fear of the moment when they will really have to learn the truth – give one a much better idea of the Reign of Terror. We think of this as the reign of people who inspire terror; on the contrary, it is the reign of people who are themselves terrified. Terror consists mostly of useless cruelties perpetrated by frightened people in order to reassure themselves.” Karl Marx in a letter to Friedrich Engles during the Paris Commune (1870).

Last week the Thugtatorship of the Tigrean People’s Liberation Front (T-TPLF) declared the end of the “state of emergency” it put into effect on October 9, 2016 following the T-TPLF- sponsored Irreecha Massacres.

The T-TPLF declared its “state of emergency” as a last desperate act of self-preservation and to stave off total collapse.
[adToAppearHere]
The T-TPLF state of emergency decree does not signify strength or power. It signifies deep fear, panic, dread and trepidation.

The T-TPLF state of emergency is the “reign of people who are themselves terrified.” It is the emblem of a system of “cruelties perpetrated by frightened people in order to reassure themselves.”

Truth be told, the T-TPLF declared a state of emergency because it was terrified of the unity of Oromos and Amharas.

In 2016, both groups rose up in defiance against the T-TPLF’s 26-year minority apartheid tyrannical rule.

The 1985 state of emergency decree marked the beginning of the end of apartheid minority white rule in South Africa.

I shall wager that the 2016 T-TPLF emergency decree shall be remembered as the beginning of the end of minority apartheid T-TPLF rule in Ethiopia.

The 1985 South African apartheid emergency decree gave police, security and military forces sweeping powers to arrest without a warrant, indefinitely detain and interrogate alleged suspects without the presence to counsel, use deadly force at the slightest provocation, ban antiapartheid organizations, impose curfews and place severe censorship on the media.

Within months, some 10 thousand persons under the age of 18 were placed in detention in apartheid jails.

The 2016 T-TPLF state of emergency decree is a mirror image of the South African decree.

The T-TPLF decree authorized police, security and military forces (officially designated “Command Post”) the power to detain any person without a warrant indefinitely and perform prolonged interrogation without counsel, use deadly force in the discretion of the “command post”, prohibit public gatherings, ban any written documents deemed to be “terroristic”, impose curfews and total censorship on the press.

During the T-TPLF state of emergency nearly 30,000 persons were detained. The T-TPLF itself admitted detaining over 11,000 people as of November 12, 2016.

As of August 2017, nearly 8,000 detainees are facing trials in T-TPLF kangaroo/monkey courts. The total number of detainees over the past ten months in T-TPLF prisons is likely to exceed 100,000 innocent persons.

The T-TPLF is famous for cutting and pasting laws from other countries and putting their name on it.

The tactical objective of the T-TPLF decree was to enable it to buy more time to divide the “Amhara” and “Oromo” opposition and wage a war of attrition against each group and weaken their will and united resistance to its rule.

By October 2016, the T-TPLF was losing its undeclared brutal war on the Amhara and Oromo fronts. The T-TPLF was so desperate, it pulled its troops from Somalia in October 2016 to deal with the mass uprising in Oromiya and Amhara regions.

Truth be told, since May 1991, the month the TPLF ragtag rebel army marched on the capital, Ethiopia has been under a de facto police state of emergency.

That state of emergency became de jure (by law) when the T-TPLF enacted its so-called anti-terrorism law (Proclamation No. 652/2009).

The T-TPLF was just playing semantic games substituting “command post” for a martial law police state in the guise of “antiterrorism”. No one is fooled by the T-TPLF’s con name game.

Now the jig is up for the T-TPLF!

Wise and oppression-weary Ethiopians are rising up across Ethiopia just like Kwame Nkrumah predicted decades ago at the dawn of African independence in his poem, “Ethiopia the wise shall rise.”