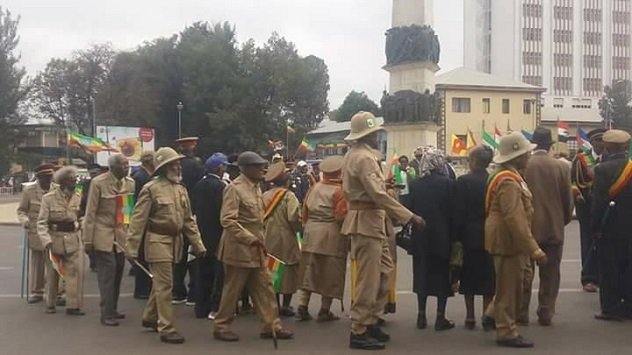 As well, Ethiopians in the diaspora commemorated the day. In DMV area, there was a prayer at St. Michael Ethiopian Orthodox Church. Different broadcasters prepared special program in commemoration of the day.

Nearly one million Ethiopians were killed during the invasion of Ethiopia by Fascist Italy. Apart from indiscriminate killings by fire squad, Ethiopians were bombed with mustard gas in violation of international conventions. The Vatican is implicated with involvement. The government of Italy has not yet apologized for the massacre. A campaign is underway by “Global Alliance for Ethiopia” to make Italy apologize for the massacre and pay for the damages it caused.

After five years of protracted bitter resistance, Ethiopian patriots managed to defend the independence of Ethiopia.

Public relation of the association, Hailemicheal Abay, conveyed message to the young generation that Patriotic fathers defended Ethiopia in unison without any division along linguistic, religious and ethnic lines, says a report published by Mereja and that the youth should emulate Ethiopian patriots.