Ethiopia is still under state of emergency. It does not obviously feel good to indulge in the discussion of topics like this. And this short blog entry does not in no way represent a state of forgetfulness as to what has happened to thousands of Ethiopians. After all, Ethiopia is still living the horror in many ways.

Yet, it is also good to remember that part of the struggle for Ethiopia is about preserving Ethiopian social values. And art, including music, is one of the ways in which Ethiopian values are preserved. Art, in its own right, is a soldier. If the hands of the wise, it stands defense the cultural and social identities of societies. That is exactly what notable Ethiopian song writers, painters and what not did in that past. In painting, we have giants like Maitre Artiste World laureate afewerk tekle and his breeds like Mezgebu Tesema. In Music, they were too many.

In fact, in countries like the United States art is employed as one of the tools in pursuit of hegemonic power – and not just Hollywood – other forms of art including idol shows are essentially ways in which false consciousness is created which is useful for maintaining a manipulable mass.
[adToAppearHere]
Beauty as a concept is a subject of literature the world over -perhaps, may be certainly- since the ancient time. But the interpretations of it is different,needless to say. What is beauty in one society may not be so in other societies. And that is where the notion of beauty contest,at least, for “miss world title” is somewhat bizarre. I get the marketing side of it where it serves the fashion industry.

Of the conversations I remember on the notion of beauty from the work of one of Ethiopia’s literary giant, Dagnachew Worku,in “Adefris” relates to Ethiopian beauty. The painter character in the book,forgot the name, was challenged in his assertion of Ethiopian beauty. And the challenger was sort of an early comer “global citizen” type who was fond of,apparently, ridiculing Ethiopian values and, with it, patriotism. The argument goes somewhat like, “There’s no such thing as Ethiopian beauty” which the painter was struggling to capture with his brush. The painter’s answer was simple. He answered, if there is an Ethiopian look and complexion, there certainly is Ethiopian beauty. Yet again, argued the painter, the look itself is an expression of intrinsic values shaped by the societal values. Essentially, what is alluded as “inner beauty” even in other cultures. From the conversation, there emerged a picture that beauty, as seen in Ethiopian girls, is a combination of modesty,faith,reservation,perseverance,all forms of kindness-among many other things. He was trying to bring out all those qualities in his paint. That is the very reason why the above song of Tedros Tadesse -Yehager Bet wotat nat- is laden with meaning and significance to many Ethiopians.

Too bad, Ethiopia is not spared from global cultural conquest which at times crept into Ethiopian society under the guise of gender politics wrapped as “women empowerment.” The idea is that Ethiopian women are powerful by virtue of the culture. Not to suggest that there were/are elements of traditions that are too much, to say the least, for women and need to be eliminated. But there were values of Ethiopian women cherished and venerated – which is on the verge of being bulldozed by cultural conquest. For your information, there is a female Ethiopia character, don’t remember the name again, in Daganchew Worku’s book whom one could describe as feminist -imagine as early as that time. But She was not a “liberal” or western feminist. She was purely Ethiopian. The equivalent of the Ethiopian expression is “የሴት ወንድ ናት！” – it was a cherished quality.

Lyrics of the song is in the image below if you are curious. Writer could be reached on twitter : @dimetros 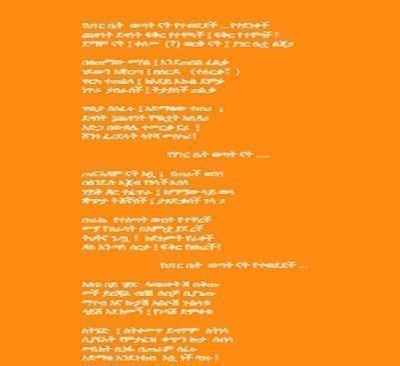