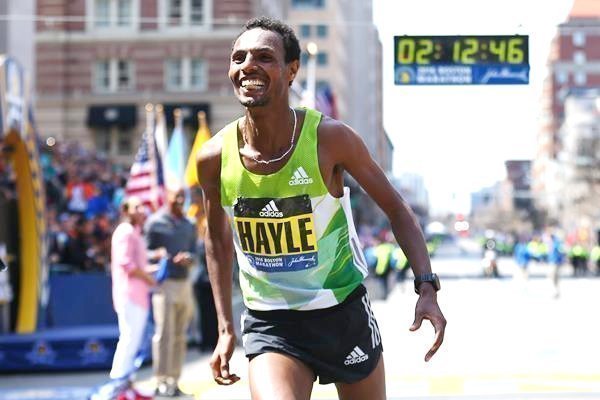 Berhanu, the reigning Boston Marathon champion, lived up to expectations as the fastest entrant, prevailing in 2:08:27. Mengistu, 26, won the women’s contest in 2:25:58.

A group of some fifteen runners led early in the race, hitting the five-kilometre mark in 15:19 and 10 kilometres in 30:15. Soon after, the confident Berhanu chose to break away and run alone at the front, with countrymen Shura Kitata, the runner-up in 2016, and Mosinet Geremew, who is a half marathon specialist, running side-by-side continuing the chase as the rest of the lead group fell further behind.
[adToAppearHere]
With a fast personal best of 2:04:33 set last January at the Dubai Marathon, the 22-year-old Berhanu did not hide his ambition before the race of targeting the course record and Chinese all-comers’ record of 2:06:19, set by Kenya’s Moses Mosop in 2015.

Berhanu maintained a promising pace in the early stages, as the past winner of the Dubai, Zurich and Warsaw marathons passed 15 kilometres in 45:39 and 20 in 59:55. But after passing the 25 kilometre mark in 1:15:16 with an advantage of 36 seconds in hand, he began to slow down.

Although falling to set a new course record, Berhanu’s comfortable lead was never threatened for the rest of the race.

“I am happy to win. The course is very hard with a lot of rises and falls. And the weather is very hot,” said Berhanu, who was running under sunny conditions with the temperature ranging from 15 to 19 degrees.

Geremew, 24, outraced Kitata in the final 10 kilometers to finish second in 2:10:20. The winner of the Yangzhou Jianzhen Half Marathon 2015 to 2016, Geremew holds the Chinese all-comers’ half marathon record of 59:52. Xiamen was his first race over the classic distance.

In the women’s race, the fastest woman on paper also managed to take the victory as reigning Beijing Marathon winner Mengistu bagged her second straight title in a row in China.

The 26-year-old, whose PB of 2:23:25 was achieved when she won the 2015 Paris Marathon, registered a 2:25:58 clocking, two seconds slower than her winning time recorded in Beijing last September and more than six minutes shy of the 2:19:52 course record set by world champion Mare Dibaba in 2015.

“It’s a pity that I didn’t improve my personal record. It is hot today and the slopes in the return course were pretty hard,” said Mengistu, who also revealed that her next goal would be the 2017 London Marathon.

A group of seven runners paced the race through 10 kilometres in 34:30 and 15 in 51:33. After the halfway point the lead group was trimmed to four: Mengistu, defending champion Workenesh Edesa, 2016 Beijing Marathon runner-up Melkam Gizaw, and 2016 Wuhan Marathon winner Meseret Legese, who had been running in Xiamen for the fourth straight year but yet to claim a victory.

The quartet led for another five kilometers before Edesa and Mengistu pulled away from the other two.

The 24-year-old Edesa, who cut more than seven minutes off her PB to win in 2:24:04 last year, tried to shake off Mengistu with a series of rhythm changes but only saw her effort come to nothing.

The patient Mengistu took her chance near the 35-kilometre mark. She passed the defending champion in style and never looked back before crossing the finish.

Edesa had to settle for second in 2:26:27. It was her third marathon race and her first defeat after victories in Marrakech and Xiamen respectively.

Vincent Wu for the IAAF