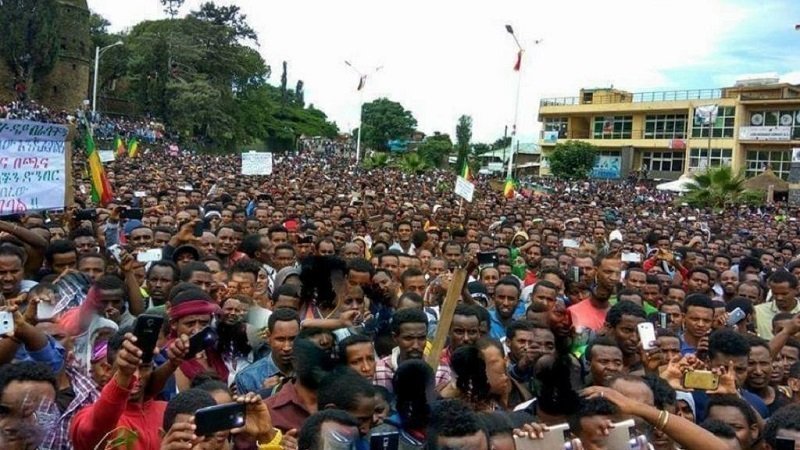 In a bold move to defy over-repressive state of emergency, Gonder kicked off a three days stay-at-home protest.

Ruling party claims that it aborted the strike. However, social media sources assert that the first day of strike was successful and will continue for two more days.

Clandestine task force organizing protests in Gonder vow to continue with popular protest despite state of emergency which banned all forms of protests including stay-at-home strikes.

Ethiopian satellite television report on the strike in Gonder indicates that infuriated military officers were forcing business owners, at a point of gun, to make them open their businesses.

Defiance of Gonder has got a noticeable veneration from Ethiopians. It is now seen as a leader of resistance against the regime.

According to organizers who spoke to ESAT, the three days strike in Gonder is organized in part to honor victims of Ireecha massacre – mostly Oromos.

For the regime, it is an expedient government decision to “protect Ethiopia from threat” – conspired by foreign powers including Egypt. Egypt denied the allegations this week.

Political commentators and observers tend to see strikes in Bahir Dar and Gonder as clues that the “legal” approach to intensify repression in Ethiopia using state of emergency new regulation as a tool will only prove futile.

Determination is apparent that Ethiopians do not seem to want to go back to the era of total repression under TPLF rule.

Communication black out is imposed in the parts of Ethiopia where the regime intends to undertake violently repressive operation, military so to speak, against dissidents.

borkena
by Dimetros Birku tweets :@dimetros
***
If you intend to use this content, please ensure that you cited it property. Hyperlink source.