Business affiliated to the regime in Ethiopia could lose big time 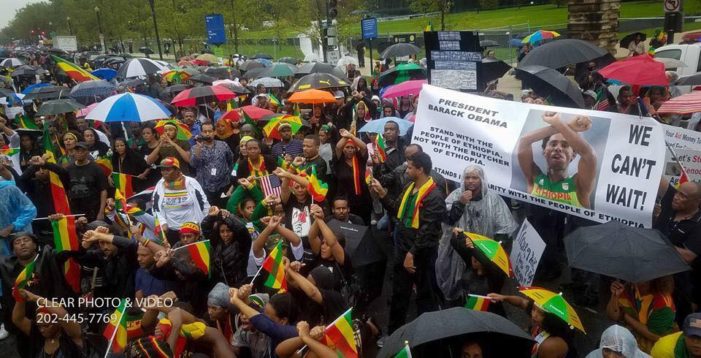 Toronto – Ethiopian and Ethiopian-Americans protesters in Washington DC area called for boycotting businesses affiliated with the regime in Ethiopia.

Washington DC, Maryland and Virginia areas are believed to be home to well over 300,000 Ethiopians and Ethiopian Americans. Enjera, staple food for most Ethiopians, is one of the major commodity items highly consumed by Ethiopians in DMV area,as is the case elsewhere where there are Ethiopian Diaspora.

There is widely held belief among politically informed Ethiopians, and there seem to be evidence for it, that organic Enjera export business from Ethiopia, mainly ends up in North American and Europe for the Ethiopian Diaspora community,is controlled by wife of the late Meles Zenawi, Azeb Mesfin, and her cronies -who are either members or affiliates of the ruling Tigray government. TPLF rules wearing EPRDF political hat. Her Enjera business is estimated to be worth of hundreds of millions of dollars.

If Ethiopians in the US strictly enforce the boycott, no question that enjera business from Ethiopia will suffer big time.

When Ethiopians organized demonstration in Toronto sometime in mid August of this year, they called for, like Ethiopian Protesters in Washington, boycotting business affiliated with the regime in Ethiopia.

Other commodity items supplied by people of same political affiliation will be identified and targeted, told a protester to the reporter of this news.

Do Ethiopians in the diaspora have alternative to imported Enjera?

There is alternative to imported Enjera. Many members of Ethiopian communities in North America,Europe and Australia prepare Enjera for sale – in fact at a lower price compared to imported one. Reason that many are used to the imported one is because it is usually organic and 100 % pure teff – an indigenous crop to Ethiopia that has recently become popular among some Hollywood celebrities.

[adToAppearHere]Considerable number of Ethiopians in the diaspora incline towards the belief that avoiding imported organic Enjera is an expression of economic resistance to the minority regime that is killing Ethiopians in Amhara and Oromia regions of Ethiopia and it is the least that can be done.

Economic Muscle of the ruling party

Twenty five years ago, the ruling Tigray People’s Liberation Front,members and affiliates were never known for the colossal wealth they now have.

Now the TPLF party alone, according to information released a few years ago, is worth between $6 to $7 billion and owns businesses in the construction, banking, manufacturing, Hotel and tourism,agriculture, import and expert, among other things,sectors and much of the wealth is acquired illegally. That undoubtedly makes it one of the richest political party in the continent of Africa.

Members of the party and their relatives are also believed to have amassed huge wealth mostly in a fraudulent way by exploiting their political power. Sometime this year, the ruling party has admitted again that corruption is cardinal malaise in the the party that could even compromise its very existence.. But critics in the opposition quarter trash it on grounds that unprecedented corruption is entrenched in the country by design and as a means to create a political support base.

Ethiopian activists are planning boycotts targeting party and affiliate business at home for several weeks now. When the plan is implemented, many businesses related to the ruling party are prone to lose.