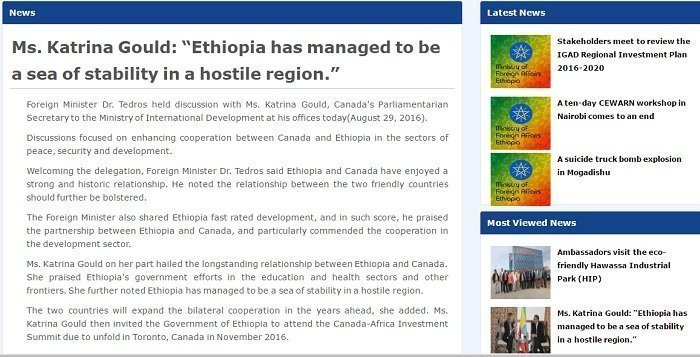 In a news update published on Foreign Affairs Ministry website, Ministry says that Katrina Gould [must be a reference rather to Burlington member of parliament -Karina] held talks with Tedros Adhanom, minister of foreign affairs, on issues of security, peace and development on August 29,2016 in Addis Ababa. The news update claimed that it has got invitation to attend Canada-Africa Investment Summit, to be held in November 2016 in Toronto.

The impact of Karina’s remark in terms of face-lifting the regime,which is now known the world over as a hallmark of violent repression, is negligible -if at all. However, it may sound bitter for Ethiopians Canadians who were protesting in Toronto against killings of civilians by the regime in Ethiopia. Since the beginning of July 2016 alone, well over 500 civilians are killed by the same regime that is hailed as a “sea of stability.”

As a matter of fact, her remarks came at a time when the country’s prime minister ordered deployment of armed forces in the Northwester part of Ethiopia to violently suppress popular uprising. Many activists are accusing the regime in Ethiopia of undertaking genocide against Amhara – one of the largest language speaking group in the country. Children, women and elders are among victims of violent attack by the minority regime of Tigray Peopole’s Liberation Front. Observers are concerned that Ethiopia could head to deadly civil war.

Rio Olympic Silver Medalist Feyisa Lilesa told the world story of violent repressions that Ethiopians are living by showing protest sign as he was crossing the finishing line and during the medal ceremony.

If the claim by the regime in Ethiopia regarding Katrina’s remark is proved to be true, Canada could brace itself for protest by Ethiopian-Canadians and Ethiopians around the world.

Ethiopians were infuriated by former US Under Secretary of State,Wendy Sherman, when she remarked last year that “Ethiopia is a democracy.” She resigned from her post following persistent protest by Ethiopian-Americans.

Historically, Canada is known as a champion of human rights and had a profoundly positive image in the international stage for its humanitarian traditions for the good part the last century, even pre-Harper Canada. Canada is one of the few donor countries to the regime in Ethiopia.