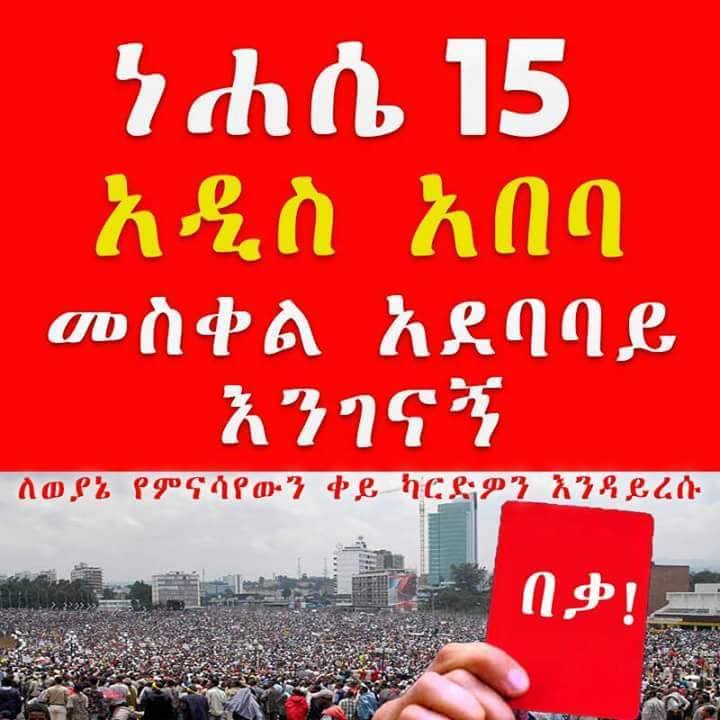 As much as Ethiopians love their country and take pride in their identity, they were reduced to second citizen status for the past twenty five plus years by the ruling TPLF dominated party. All sorts of repressions and in their worst forms are applied against Ethiopians.

Subsequently, for the good part of the the 25 years Ethiopians have been struggling in pursuit of a political space to plan change. It was documented very well, including by reputable human rights organizations, that thousands of Ethiopians paid in live in those years and still no change.

Last year, the regime in power even declared election victory by 100 percentage point leaving no single seat for opposition in the parliament. Crackdown on press freedom heightened even after many journalists were thrown to jail on charges of “terrorism”

Young people who were passionate about peaceful struggle were disappointed to the point they developed the conviction that peaceful struggle is impossible under the minority ethnic Tigray regime and were compelled to opt for armed struggle and sneak out to the Eritrea- Ethiopian border to join rebels.

Worse, on top of all forms of repressions, Ethiopians were divided along ethnic lines. The past was made, by design, a point of political controversy in a way that nurtures productive seeds for ethnic conflict to help TPLF maintain a hold on power. Oromo were instigated to hate Amharas.

The Economist tends to turn a deaf ear in covering matters as it relates indictment against TPLF. Even amid constant popular uprisings across the country and killings of hundreds of civilians , The Economist opts not to report about it in a serious way. But event The Economist admitted that the ruling party is ethnic based authoritarian when it cited the administration as an example of tribal politics in Africa in its report yesterday.

Surely, the prospect of ethnic conflict is not entirely averted in Ethiopia. However, there seem to be greater understanding between Amharas and Oromos – the largest language speaking grounds, most intermingled but were being instigated to fight against each other.

The focus is now TPLF. Unlike the past, demand is no longer about political space. It is about political change.Most Ethiopians are totally fed up with the regime -which explains uprisings in most parts of Ethiopia for the past several months notwithstanding killings.

It it Addis Ababa’s turn to show a massive opposition to the regime in power. It will happen in a matter of hours. Protesters will be carrying read card to show it to TPLF signifying that it is no longer in the game.

What can be expected? Hard to predict. what is know at this point is that countries like the US issued travel advisories for their citizens in connection with the planned protest in Addis Ababa.

Of course, the regime is determined as ever, and it means killing protesters, to avert the peaceful protest from happening despite it is a constitutional right. Police issued a statement to warn that no protest is allowed. The question is do people care about permits to exercise constitutional rights?

There are rumors that diplomats in Addis Ababa are closely watching the development. Recent report by Stratfor foretasted that the ruling TPLF party could not sustain its power for a long time which is pretty much clear to many Ethiopians. For many, the concern is the damage it causes to Ethiopia before it is thrown to the dust bin of history. Some event goes to the extent of worrying that Ethiopia could experience something like Rwanda ;genocide. Indeed the regime is reckless and has radicalized its ethnic base and loyal Agazi troops which is believed to be dominantly ethnic Tigay.

Check back for updates