Narrow Nationalism is a thing of TPLF : protesters in Toronto 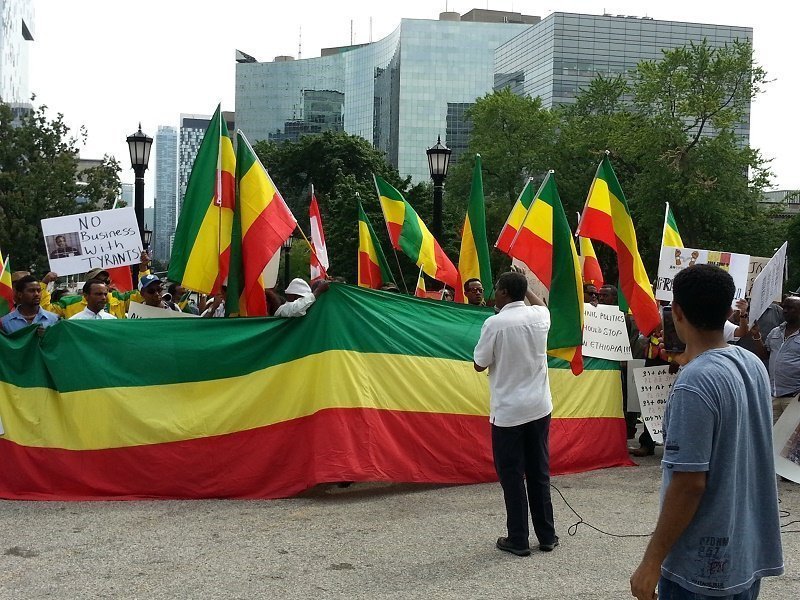 Hundreds of Ethiopians protested in Toronto this afternoon against the ongoing killings of Ethiopians by the ruling party. Protesters also opposed government of Canada’s support to what they call dictatorial minority regime in Ethiopia.

The protest was held in front of Ontario provincial parliament near Queens Park.

Protesters denounced recent killings in many parts of Ethiopia by the regime in power. In an apparent response to latest government propaganda aired in state television in Ethiopia which accused Ethiopians of narrow nationalism and chauvinism, they chanted “Narrow nationalism” is a thing of TPLF (Tigray People’s Liberation Front)- not of Ethiopians.

“Ethiopia is Amhara, Oromo, Tigre, Wolayta and all other people in Ethiopia” chanted the protesters.

Among others, demands include an end to killings in all parts of Ethiopia and an end to the TPLF regime.

The protest was organized by the Ethiopian Association in the Greater Toronto area. President of the Association, Yesihareg Worku Mersha, spoke at the event. “Ethiopians should not support businesses run by the regime in Ethiopia” remarked Yeshihareg. Her message seem to have resonated very well with the crowed as there was a big applause for her following her speech.

As well, Yeshihareg encouraged Ethiopians to contact their respective members of parliament to put pressure on elected politicians to initiate a bill against mass killings of Ethiopians by the regime in power. Boycotting products related to the regime in Ethiopia in one way or another was one of biggest message to Ethiopians to the point that she was very emotional about it.

Letters are prepared to the provincial government in Ontario and the Federal government of Canada. The letters addressed to Kathleen Wynne, Primier of Ontario government, and to Justin Treadeau, Prime Minister of Canada,express grave concern that the political crisis in Ethiopia is deteriorating and that Ethiopia is prone to experience a Rwanda like genocide unless the situation is reversed. It called on the provincial and the Federal governments to employ their diplomatic and economic leverage power to avert the impending danger in Ethiopia.

“Ethiopia is at a critical juncture; with the help of peace loving members of the international community the country could avert a major crisis and transition to an inclusive,democratic and just political and economic order” reads a section of the letter to the Federal government of Canada.

The letter to the provincial government noted that Canada, through business ventures and donations, is supporting the regime in Ethiopia and it could use it as a tool to influence positive change and stop massacre in Ethiopia.

In the last two weeks alone, more than 150 civilians were killed and hundreds wounded in Ethiopia when forces deployed by the ruling TPLF government fired live ammunition on civilian protesters. United Nations Human Rights body requested the government of Ethiopia to investigate the recent killings which caused a negative reactions on the part of the government in Ethiopia.

Ethiopians are planning protests in other major Canadian cities. An estimated 70,000 Ethiopians are believed to live in the GTA area.