The city of Tbilisi has suffered an incessant and torrential downpour that resulted in flooding of the low-land areas of the Georgian capital at the foot of the Caucasus Mountains. The death toll has been climbing, with numerous buildings deluged.

The death toll so far stands at 11. Bodies were found mostly in flooded private households. There have been reports of landslides in Tbilisi’s suburbs.

The water has filled hundreds of basements, underground walkways, squares and roads, and damaged electrical and technical infrastructure. The House of Justice has suffered the most among the federal buildings. Some 22,000 Tbilisi citizens remain without electricity.

Prime Minister Irakly Garibashvili announced that an emergency headquarters for damage control and recovery had been set up.

All rescue teams available have been deployed to Tbilisi to bring the situation under control.

“The situation is rather difficult. We haven’t seen anything like this in the capital before,” Garibashvili said. The Georgian PM reported that rescuers and police are doing their job well and have already saved dozens of people. “All problems will be solved,” Garibashvili promised.

The Kura River that passes through the city broke its banks and flooded Tbilisi’s Zoo, causing over 30 wild animals to flee, among them a hippo, 7 bears, six lions, six tigers, jaguars, 13 wolves and others.

Three people were found dead in the zoo’s grounds.

These were employees trying to save the animals from the flood, among them Guliko Chitadze, a woman who had worked in the zoological garden for over 25 years and who had had her arm amputated a fortnight ago after a tiger attacked her.

Out of a total of 17 penguins housed in the Zoo only three survived.

The upper part of the zoological garden suffered minor damage and the animals there, elephants, zebras, various horses and ponies and also the snake terrarium, stayed out of harm’s way.

Some creatures are now roaming the streets of Tbilisi.

SWAT teams are trying to catch them using tranquilizer darts where possible, but they have killed some that became aggressive because of the disaster, including six wolves cornered near a children’s hospital, Interfax reported.

Two lions and a tiger have reportedly been shot dead.

Police are also using helicopters to track down wild animals on the loose. 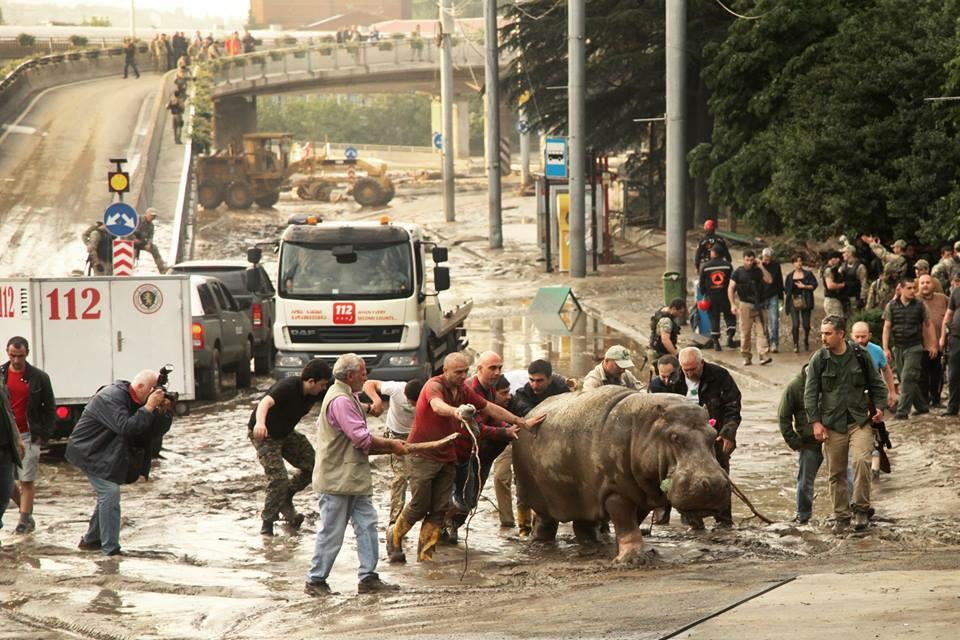