(ADDIS ABABA) – A South Sudanese academician, professor Wani Tombe Lako, died on Wednesday in the Ethiopian capital, Addis Ababa. He was found dead while in his apartment on Wednesday morning. 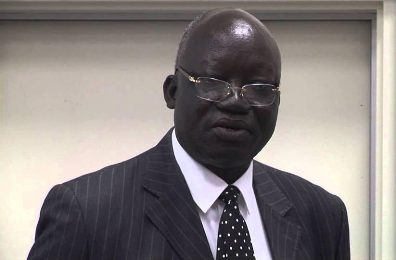 Tombe who used to live in exile in England last year came to Ethiopia and sought membership of the opposition faction of the Sudan Peoples’ Liberation Movement (SPLM-IO), led by former vice-president, Riek Machar.

Although he was not yet assigned to leadership position in the rebel faction, he participated in the mid-April leadership conference which the opposition group convened in Pagak, their new headquarters.

In a statement extended to Sudan Tribune on Wednesday, opposition leader, Riek Machar, described the sudden death of his comrade as a great loss to the country, the movement and the late’s family.

“On behalf of the Movement and my family and on my own behalf, I am extending my heartfelt condolences to the family of my late comrade Dr. Wani Tombe Lako. His death is a great loss to the Movement and the country,” opposition leader, Riek Machar, said in a statement he issued on Wednesday.

Although no public medical statement has been issued in declaring the cause of his death, his friends and colleagues said it could be attributed to heart failure.

The late held a Bachelor of Science (BSc. Hons.) in Economics and Rural Development from Gezira University, Sudan; a Masters of Human Rights Law (LL.M) from Nottingham University in United Kingdom and Doctor of Philosophy (PhD) in Rural Social Development.

He taught in various universities and wrote extensively on social and political issues about Sudan and South Sudan. The late was the leader of Greater Equatoria Council of Rights (GRECOR), a body mainly based in exile.

Late Tombe after the eruption of the current civil war in South Sudan wrote many articles urging the people of greater Equatoria region, his home region, to rise up against president Salva Kiir’s government in order to achieve freedom and prosperity in the country.

He last year joined the rebel movement led by Machar and continued to travel to United States, Canada and Australia, mobilizing the South Sudanese people to join the armed struggle against the government.

His death has received mixed reactions with observers pointing out that the loss of such a high profile personality may generate discontentment and uncertainty from within the political and geographical constituency.

Late Tombe was a strong advocate of federal system of governance in South Sudan which the rebels have also tabled for adoption in the Addis Ababa peace process and for implementation in the transitional period.

Opposition sources and family members have suggested that the body will be taken to the United Kingdom for post-mortem examinations.