Ethiopia : Development and democracy debate ahead of Ethiopia vote

Addis Ababa, Ethiopia – If Ethiopians ever possessed a strong desire to express their political views through the ballot, that sentiment seems to have dwindled in the run-up to national elections on May 24.

One 28-year-old student, who requested anonymity fearing reprisals, shrugged at the thought of the upcoming vote.

“To say we have elections, there have to be real alternatives,” he said. “This election is just so we can tell Western governments we are a democratic country,” the finance and accounting master’s degree student told Al Jazeera at Addis Ababa University’s Siddist Kilo campus.

Such views are not uncommon among the electorate and opposition members in the capital, many of whom have dismissed the upcoming vote as a formality.

The results of the 2010 election left the opposition with a single seat in the 547-seat parliament, and afterwards the EU said Ethiopia’s electoral process failed to create “a level playing field for political parties”.

It wasn’t always this way.

In 2005, the then high-school student took part in political rallies in support of the Oromo National Congress Party running under one of the main opposition coalitions, the United Ethiopian Democratic Front.

Back then, he said, the opposition was strong and united, and people thought supporting it would bear fruit.

In the election that year – preceded by a relatively open political climate – the opposition surprised the ruling Ethiopian People’s Revolutionary Democratic Front (EPRDF) by taking 31 percent of parliamentary seats.

However, the aftermath of the vote was marked by mass arrests of student protesters and opposition leaders. 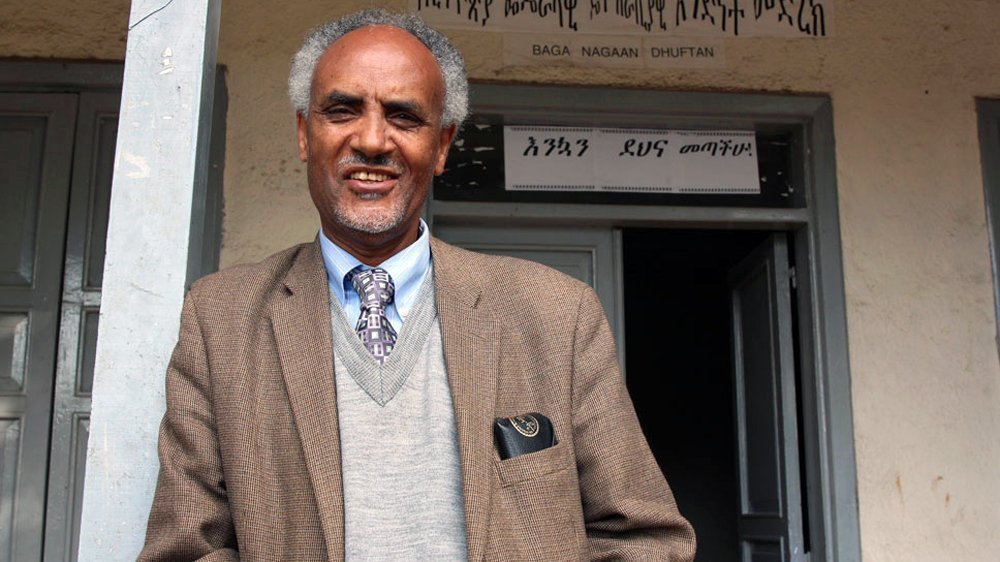 The student told Al Jazeera he was detained for months, a fate he shared with thousands of students who took to the streets.

The country’s controversial 2009 anti-terrorism proclamation has been criticised for its broad application to journalists and opposition members in the run-up to this year’s vote, including six “Zone9” bloggers currently on trial for terrorism-related charges.

According to Ethiopia’s National Electoral Board, 47 parties and 5,819 candidates are contesting the ballot for the national parliament and the regional councils.

The ruling party has fielded 501 candidates for the 547-seat parliament, followed by the Ethiopia Federal Democratic Union Form (MEDREK) and the Blue Party with 270 and 139 candidates, respectively.

Opposition members complain that navigating the political landscape ahead of the election has proven difficult.

“We are more consolidated and better positioned compared to previous elections, but the space is more closed,” Professor Beyene Petros, chair of the centre-left MEDREK, told Al Jazeera.

Both MEDREK and the Blue Party have also cited difficulties registering candidates.

The Blue Party’s chairman said more than half of the party’s 380 registered candidates were removed from the party list in February on administrative grounds.

“This is politically motivated to hinder Blue Party activities. The electoral board is not independent,” Yilkal Getent told Al Jazeera.

The cancellation of candidates, Getent said, has thwarted the party’s ability to mobilise voters through ongoing political debates aired on state media, as time allocations are determined based on the number of candidates.

The Blue Party considers itself centre-right and wants to appeal to the country’s young electorate, but government officials dismiss it as a far-right movement.

The government also accused the Blue Party of inciting violence last month at a government-organised rally in Addis Ababa following the killing of Ethiopian migrants in Libya by ISIL – allegations the party’s leaders dismissed.

Despite the large number of parties registered, the opposition alleges many are allied with the ruling party.

“No more than two to three parties are real opposition parties. The others don’t run to win, their role is to dilute the vote for the opposition,” Merera Gudina, associate professor of political science at Addis Ababa University and a leading opposition figure, told Al Jazeera.

Some also criticised the voter registration process that ended in February, allegedly covering more than 80 percent of the eligible electorate.

“The officials came to my house to give me the registration card although I didn’t ask for it. I was scared, so I took the card.”

The deputy chairman of the National Election Board, Addisu Gebreigzabhier, denied such allegations.

“We are just doing civic education,” Gebreigzabhier said. “The high voter registration is a result of the electorate’s desire to exercise their democratic rights.”

The pre-election process, he added, has been professionally run according to the country’s electoral laws and has been “to the satisfaction of all parties”.

Yohannis Getachew, a 32-year-old taxi driver in Addis Ababa, has been following the ongoing political debates on the radio. He said the opposition has failed to present a convincing alternative.

“At least the government is building roads and railways. I think that’s good. I don’t know what the opposition would do,” said Getachew

The ruling party’s growth and transformation plan has resulted in double-digit economic growth over the past five years.

“It’s very difficult for any party to come up with an idea that can match an 11 percent growth rate,” said Ganenu Asefa, a political adviser at the Government Office for Communication Affairs.

Opposition parties, however, say that growth has benefited only a small elite aligned with the ruling party.

“The so-called growth agenda has been impressing the foreigners, not the citizens,” Professor Gudina, whose Oromo Federalist Congress party runs under MEDREK’s ticket, told Al Jazeera.

“Development without democracy is very difficult to sustain,” he added.

The government Growth and Transformation Plan (GTP) – characterised by state intervention in the economy as well as massive public investments in infrastructure – aims to turn Ethiopia into a middle-income country by 2025.

“The targets they set in the GTP were very ambitious, and even if they achieve 75 percent of those targets, it will be a tremendous achievement for a country coming from such a low base,” said the World Bank’s country director for Ethiopia, Guang Z Chen.

Chen said in order to sustain strong growth going forward, the government will need to make policy adjustments so as to stimulate the industrial sector, which currently contributes only 12 percent to the GDP.

With urbanisation advancing at twice the rate of overall population growth, job creation for Ethiopia’s idle urban youth is another priority. Analysts say although the government has recognised the need for structural reform, corruption and insufficient technical capacity could hamper its ability to manage the process.