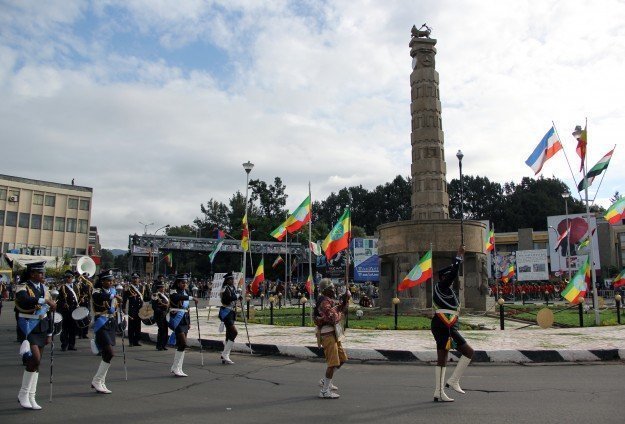 Ethiopian veterans, who gathered on Tuesday to commemorate comrades who fell during the Second Italo-Ethiopian War (1936-1940), say Rome should apologize and provide compensation for its use of chemical weapons – namely, mustard gas – during the conflict.

“Italy should issue an apology and compensate Ethiopia for all of its war crimes, in particular for the chemical attack against Ethiopians,” Daniel Jote Mesfin, head of the Ethiopian Patriots’ Association, told The Anadolu Agency.

Italy’s Benito Mussolini regime tried to invade Ethiopia for the second time in 1936 after Italian troops were defeated in the Battle of Adwa in 1896.

On May 5 of each year, Ethiopian veterans gather to commemorate Ethiopian Patriots’ Victory Day to honor their brothers-in-arms who fell in the conflict, during which Italy used mustard gas against Ethiopian villages and Red Cross camps.

“Italy used mustard gas to attack Ethiopians despite the Geneva Protocol, a treaty that prohibits the use of such chemicals,” Daniel, who fought in the war, said.

“The gas killed many people in North Shoa, Addis Ababa and Wollo. The dead bodies of about 100,000 Ethiopians were buried, but many weren’t buried because of the heavy fighting,” he added.

“The call for justice is growing among Ethiopians abroad and at home,” Daniel, the son of well-known Ethiopian veteran Ras Mesfin Sileshi, asserted.

Italy provided some funding for the construction of Ethiopia’s Koka Dam, located 75km southeast of Addis Ababa. However, said Daniel, this was not sufficient compensation given the enormity of Italy’s wartime crimes.

“The current generation [of Ethiopians] is speaking loud, saying Italy should ask Ethiopia’s forgiveness and must pay compensation,” he asserted.

“Italy is building a mausoleum for its general, Rudolfo Graziani, who was the main actor in the war crimes against Ethiopia,” he added. “We strongly oppose this, as a genocide criminal does not deserve such an honor.”

“It invaded a sovereign state [Ethiopia] and attempted to dismantle the country’s state system,” he said. “This was unacceptable under international law at the time.”

“Italian governments that came after Benito Mussolini should admit the crime, issue an apology and compensate Ethiopians,” said Habib.

“An expression of remorse and compensation is necessary,” he added. “The Ethiopian people have the right to request an apology and be compensated.”

According to Ethiopian Foreign Ministry documents, the two former enemies “have overcome the problem arising from the era of colonialism and fascism that have affected their relations from time to time.”

Relations between the two countries have improved in recent years, the documents read, and Italy had come to be viewed as “one of the most valuable partners for economic cooperation.”

Italy contributed substantial funding for the construction of Ethiopia’s Gilgel Gibe II and III dams. There are also a number of Italian companies currently working on projects in Ethiopia.

The total trade volume between the two countries stood at $22.7 million in 2011.

Last Friday, Ethiopia’s parliament approved an $8.9-million interest-free loan agreement with Italy, funds from which will be used to expand basic services.

However, another veteran who fought in the war said Ethiopia was “unable to forgive Italy” for its use of chemical weapons in the conflict.

“What Italian troops did during the war is unforgivable,” Maj. Dejene Meshesha, 88, told AA.

“I know that the Ethiopian government has established relations with Italy,” said Dejene in full military dress sporting various medals.

“I cannot oppose these relations, but I will never accept Italy’s friendship, as I saw how it massacred innocent Ethiopians with poisonous gas,” he added.

“There are no words to describe the brutality of the Italian troops,” he recalled. “I was 15 at the time and still suffer from the horror of the war; I still feel it.”

Another veteran, 97-year-old Sergeant Demissie Tsegaye, was only 19 when he went to the front with his father, brother and uncle.

“All of them were killed by the Italians,” he said. “Only I survived to continue the fighting alongside other patriots.”

“The Italian attack was accompanied by numerous atrocities, including the use of mustard gas,” Demissie recalled. “Many of the dead were left unburied, becoming food for vultures and hyenas.”

“I still feel pain when I remember the dead bodies of civilians and patriots left unburied,” he remembers bitterly.

Despite the passage of more than 70 years, he said, “I still suffer from post-traumatic stress.”