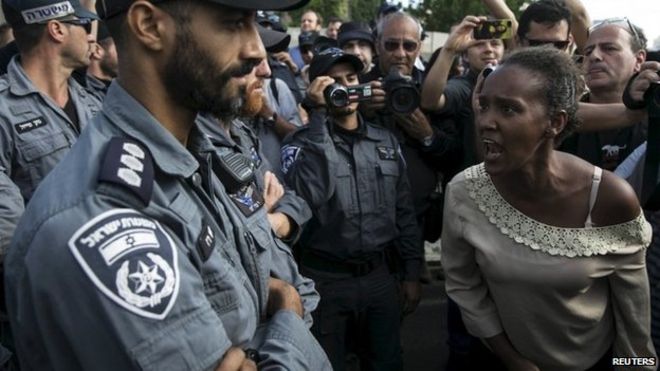 Police in Israel have fired tear gas and stun grenades in clashes with ethnic Ethiopians protesting about what they say is police brutality and racism.

Earlier, thousands of Israeli Jews of Ethiopian origin had taken part in a rally in Tel Aviv.

But the protests turned violent and some demonstrators tried to storm the city’s municipality building.

At least 20 police officers were hurt and 26 people were arrested.

Israeli police on horseback charged demonstrators in an effort to bring the situation under control.

The protests came after a video emerged last week of an Israeli soldier of Ethiopian descent being beaten by police in Tel Aviv.

Two police officers have since been suspended on suspicion of using excessive force.

Ethiopian Jews living in Israel have said in the past that they are subject to discrimination, and similar protests in 2012 followed reports that some Israeli landlords were refusing to rent out their properties to Ethiopian Jews.

Ethiopian Jews’ income is considerably lower than the general population, and they are much more likely to face limited educational opportunities and to end up in prison.