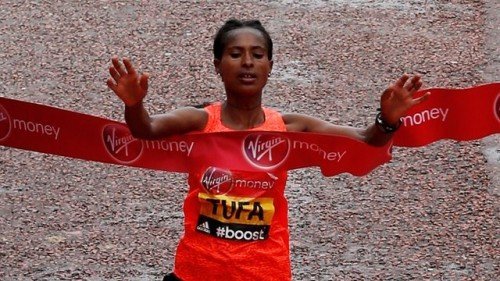 Tigist Tufa of Ethiopia won London Marathon earlier today in a time of 2:23:22. According to BBC sport report, two-time winner of London, Mary Keitany -from Kenya- was in the London marathon today.

However,Tigist Tufa was rather comfortable, according to BBC report, to claim London Marathon 2015 title. Tigist Tufa and Tirfi Tsegaye run with nine other athletes until they change gears to sprint ahead of the group when they were about three miles away from the finishing line.

Tigist is quoted by BBC as saying “The weather was very difficult for me and I found it a very slow race until the end and I was pushed.” She added “I’ve always dreamed about winning the London Marathon and I can’t say how happy I am that this has come true.”

Tigist was the winner of 2014 Shanghai Marathon.

Tirfi Tsegaye,another Ethiopian athlete, finished the London Marathon 2015 third in a time of 2:23:41 – just a second behind Mary Mary Keitany who finished second.

The men’s race was a different story : Kenyan athlete Eliud Kipchoge claimed London Marathon 2015 Men’s title by winning the race in 2:4:42. London Marathon Men’s record is 2:04:29 and is held by Kipsang