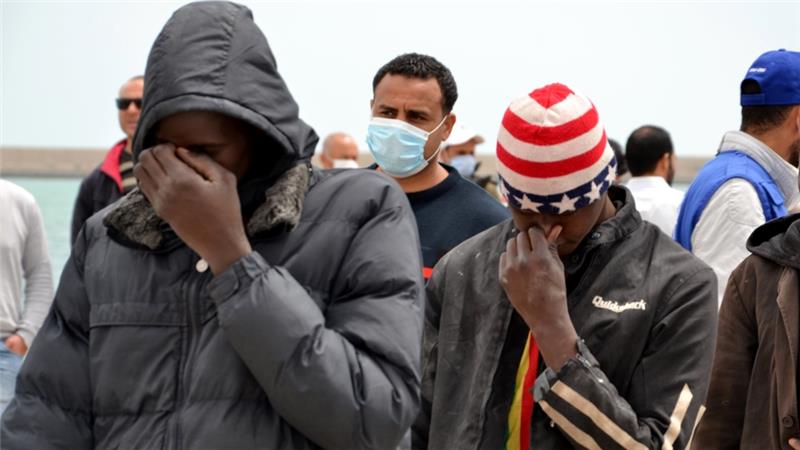 Charkos township in Ethiopia’s capital Addis Ababa is no different from many other townships in Africa.

The stories from those who live in similar neighbourhoods across Africa are also similar.

Poverty, a sense of hopelessness, crime. There are some positive stories too….but very far in between the negatives.

What sticks out in Charkos though is the overwhelming desire by so many young people to leave, not just the township, but Ethiopia. To risk dangerous sea and desert routes, pay smugglers thousands of dollars cobbled together by poor family members to get to Europe or to Gulf countries.

We are at a vigil for Elias, Biruk and Bekele. They grew up dreaming of one day leaving the township, having a better life in another continent far from home.

They were killed by ISIL fighters alongside other Ethiopian migrants in Libya as they tried to make that dream a reality.

Bekele’s mother told us that she did not even know her son had left until he called her from Sudan, asking for money to pay smugglers to help him travel through the Sahara desert and into Libya. From there he hoped to cross the Mediterenean sea to Italy and then onwards to his European country of choice, which he had not decided yet.

Five of those who were killed including Bekele were from Charkos.

I spoke to a dozen or so of their friends who were at the vigil. They saw them off two months ago.

Here’s how the conversation went.

Question: Why did your friends leave?

Question: What is so wrong with being home, trying to make a life here?

Answer: There are no opportunities. If I don’t go, I’m stuck here with nothing to do and I don’t want to be a burden to my family.

Question: But knowing what you do about how dangerous the journey is -would you still do it, still risk death?

Answer: I know it’s dangerous, but I might be one of the few to make it safely so yes, I’d take the risk.

Question: It’s a very expensive trip, no less than $3000. Surely with that kind of money, you can start a business here.

Answer: Our families can’t give us money while we’re here. They only help when there’s a plan to leave, because they’re more certain that eventually send the money back.

Michael Girema is only 20 and he’s already attempted the journey. In March this year, he crossed in to Sudan and paid smugglers to take him to Libya and onwards by boat to Italy. He only got to the Libyan border. His smugglers disagreed on payment with the border police. They were returned to Sudan and the money they had paid for the first part of the journey was never refunded.

“The journey is very hard” he told us, “the smugglers don’t care about anything but money.”

I asked him if he’d make the trip again.

“Yes, not now, I don’t have the money and it’s dangerous but when it’s calmer, I’ll try again.”

While being poor is a driving force for people leaving Ethiopia, some analysts argue that besides poverty, there’s a decades long fixed mentality that life is better abroad, blinding many to the possible opportunities at home.

Mehari Taddele Maru who once worked at the African Union ‘s human migration docket and is now a consultant on migration, peace and security put it this way;

“Previously, during the military regime there was a saying that you have to get out of the country through Bole, the airport, or Bale,the desert. That actually explains the mindset that existed for many years, decades and this mindset, this collective social psychology of going to dream land,countries of destination with plenty of opportunities has been a driving factor.”

The government has set up several vocational workshops to empower young people. It also gives low interest loans to youth and women groups with good business ideas, the main focus is agriculture.

But some people we talked to either did not know about these government facilities or said they are too hard to access.

As long as there’s poverty, civil strife, repression and a strong conviction that life is better on the other side, people will always find ways of trying to get there. How to deal with dangerous loopholes is what is crucial.