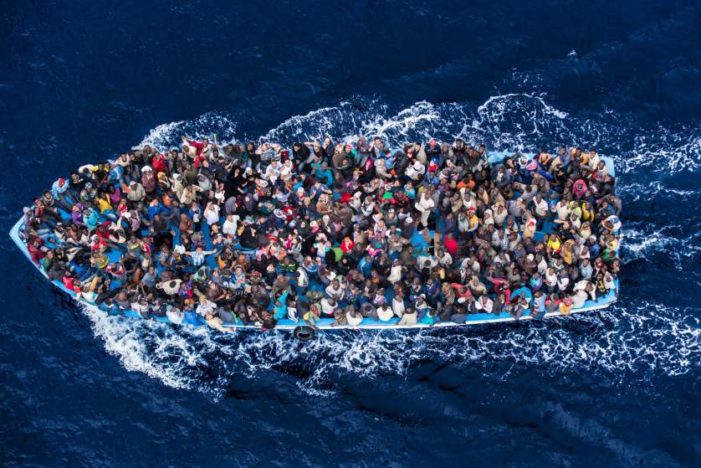 June 7, 2014 - Mediterranean Sea / Italy: Italian navy rescues asylum seekers traveling by boat off the coast of Africa. More than 2,000 migrants jammed in 25 boats arrived in Italy June 12, ending an international operation to rescue asylum seekers traveling from Libya. They were taken to three Italian ports and likely to be transferred to refugee centers inland. Hundreds of women and dozens of babies, were rescued by the frigate FREMM Bergamini as part of the Italian navy's "Mare Nostrum" operation, launched last year after two boats sank and more than 400 drowned. Favorable weather is encouraging thousands of migrants from Syria, Eritrea and other sub-Saharan countries to arrive on the Italian coast in the coming days. Cost of passage is in the 2,500 Euros range for Africans and 3,500 for Middle Easterners, per person. Over 50,000 migrants have landed Italy in 2014. Many thousands are in Libya waiting to make the crossing. (Massimo Sestini/Polaris) Source - TIME

UNHCR spokesperson Adrian Edwards gave press briefing at at the Palais des Nations in Geneva regarding the worst boat accident on Mediterranean sea, indicates a report by

From the report, it is confirmed that more than 800 migrants perished when the boat they were on board capsized at Mediterranean sea.

The UN refuge agency, which cited interviewed survivors as a source, indicated that the boat left the water in Tripoli this past Saturday morning with 850 people on board of which only 28 people are known to have survived.

According to UNHCR report, there were about 350 Eritreans and the rest were from Ethiopia, Syria,Somalia,Sierra Leone,Mali,Gambia and Ivory coast.

The survivors, apparently 28, are taken to a hospital in Catania, Sicily. One of the survivors in a young man from Bangladesh.

As well,the report indicated that children were on board of the ship.

Mean while, the guardian reported that police made arrests in connection with disaster.

Mohammed Ali Malek – 27 years old Tunisian man – who is believe to be Captain of the boat and Mahmud Bikhit – a 25 years old Syrian man- are under policy custody from among 27 survivors.

In the words of UNHCR, the accident is “…the deadliest incident in the Mediterranean we have ever recorded.”