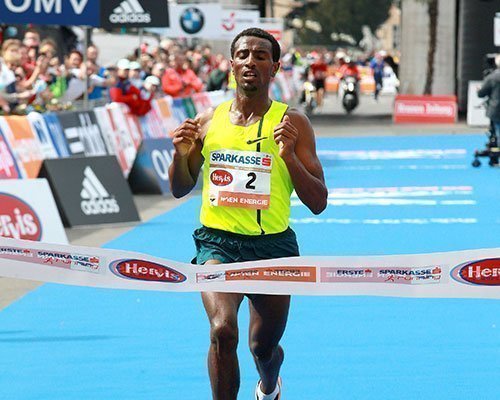 The Ethiopian only started training at 17 and ran barefoot at first.

After celebrating his biggest triumph so far Sisay Lemma revealed that he only started training at the age of 17 and did so barefoot at first. Running alone for more than 15 k the Ethiopian braved windy conditions to take the Vienna City Marathon in 2:07:31 on Sunday. His next major target will be qualification for the Rio Olympic marathon 2016.

Sisay Lemma grew up in the village Chacki which is in the Oromia region, where a large number of world-class runners come from – among them Kenenisa Bekele and Tirunesh Dibaba. “I heard about them when I was at school and of course I knew about Haile Gebrselassie. However I had no ambitions myself at that time to become a runner,” said Sisay Lemma, who grew up on his parents’ farm in high altitude of 3,000 metres. “I have three sisters, but they are not running.”