(JUBA) – Leader of an Ethiopian rebel movement, known as the Ethiopia United Patriots Front (EUPF), has dismissed as “baseless” reports alleging that his forces were being hosted in South Sudan and fought alongside president Salva Kiir’s government against the armed opposition faction led by the former vice-president, Riek Machar. 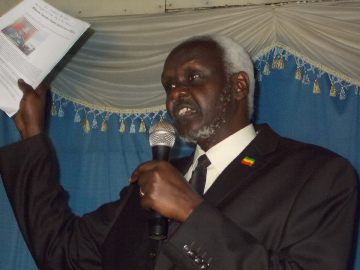 The rebel faction of the Sudan Peoples’ Liberation Movement (SPLM-IO), last week said they had evidence indicating that Ethiopian rebels in Gambella region of the western part of Ethiopia were being hosted, trained and armed by Juba’s government to fight against Addis Ababa.

They also said the foreign rebels interfered in the internal conflict when they allegedly took part in the recent government’s offensive against Machar’s forces in eastern Upper Nile state, particularly around Guelguk area.

SPLM-IO further said the aim was to make an advance towards the Ethiopian border and cross into Gambella region to attack the regional government.

The current governor of Gambella region, Gatluak Tut Khot, could not however confirm at the time that Ethiopian rebels were being hosted in South Sudan.

However, the Ethiopian rebel leader, Thowath Pal Chay, broke his silence by dismissing the accusations, asserting that his movement did not support policy of interference in internal affairs of another country or organisation.

Chay who is an Ethiopian Nuer and leads the EUPF rebel faction in Ethiopia, in a statement dated 30 March 2015, extended to Sudan Tribune, said the accusation was a propaganda aimed at tarnishing his name and political standing among the Nuer community in both countries.

He charged that Machar’s opposition group did it to gain sympathy from the Ethiopian ruling party to get military and political support by accusing him of collaborating with president Kiir.

The Ethiopian ex-official further explained that he helped in formation of the Sudan People’s Liberation Movement/Army (SPLM/SPLA) in 1983 under the leadership of its late founder John Garang de Mabior, adding he would not involve in the internal killings among “brothers” within the organisation he personally helped formed.

“I am not interested in killing among brothers who fought for their freedom with our support,” he said in the statement.

“I cannot interfere in their affairs for the killing of innocent people in the name of tribal enmity which can destroy the patriotic and national spirit of the republic of South Sudan and its people,” he said.

Chay was the Gambella regional governor in Ethiopia and also doubled as chief security official in the region during the Derg regime of the former president, Mengistu Haile Mariam.

A very close ally to former president, Haile Mariam, he was entrusted to facilitate and coordinate establishment of the SPLM/SPLA in the Ethiopian territory in 1983.

Hailing from the Gaajaak section of the Jikany-Nuer community in Ethiopia, he helped late Garang, a Dinka, to dislodge the Nuer-dominated Anya-nya Two leadership and forces from Bilpam, a South Sudanese military base in Ethiopia which was established in 1974 in a Nuer inhabited territory after the collapse of Addis Ababa peace agreement of 1972.

Chay also in 1984 authorised establishment of major refugee camps for the South Sudanese refugees which included Itang, Pinyudo and Dimma, all under the jurisdiction of Gambella region.

“Therefore, I have both moral obligation and authority to both Ethiopians and South Sudanese to live in peace and harmony among themselves,” he said.

A political socialist, Chay’s regime influenced the SPLM/A officials to initially base their ideology on socialism and united Sudan, as Ethiopia was equally fighting against secessionist movements from Eritrea in 1980s and vowed to preserve unity of Ethiopia.

He however reaffirmed his historical support to the SPLM/A despite splitting from the rest of Sudan without particularly indicating which faction he continued to support after the organisation had now split into four SPLMs of SPLM-in government, SPLM-IO, SPLM-DC and SPLM-FD (former detainees).

He cautioned regional governments against taking sides in the current internal conflict in South Sudan, saying this would cause “geopolitical problems” in the region.

The Ethiopian rebel leader whose members are mainly from Anyuak, Nuer and Oromo ethnic groups in western Ethiopia said he was not leading a secessionist or sectarian movement but against the policy in Ethiopia by the current government which he said divided the country into ethnic entities.

He said he was for the unity of Ethiopia, accusing the government of giving constitutional right to ethnic secession, which he said resulted to dismemberment of Ethiopia and division of the country into Ethiopia and Eritrea.

He claimed that as a result the division of the country in 1993 further “caused the war between the people of Ethiopia in the name of Ethiopia and Eritrea.”

In 1993, after deposing former president Haile Mariam, the Ethiopian government allowed Eritrea to vote in a referendum which resulted to an overwhelming vote in favour of independence.

But Chay criticised that the current constitution of Ethiopia that provides ethnicities or regions with the right to secede was a threat to the unity of Ethiopia, which he said his group had to resist.

“That was why EUPF mobilised Ethiopians out of ethnicity to preserve Ethiopian unity, integrity and sovereignty of Ethiopia,” he said.

Pal’s rebel movement, which mainly does political activism, is however inactive militarily and has not so far posed a significant security threat since its formation a decade ago despite alleged support he obtained from Eritrea.

Based in exile, the rebel leader said his group was committed to reaching a peaceful solution to the conflict with the Ethiopian government, although past attempts to reconcile with Addis Ababa failed.

“We are still committed to round table peace talks with the government of Ethiopia to resolve our differences in order to bring national healing and reconciliation among Ethiopians for prosperous, peaceful and united Ethiopia,” he said.