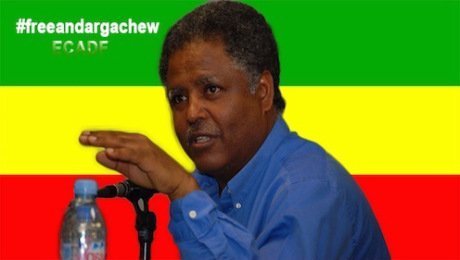 On 23 June 2014 Andergachew Tsige was illegally detained at Sanaa airport in Yemen while travelling from Dubai to Eritrea on his British passport. He was swiftly handed over to the Ethiopian authorities, who had for years posted his name at the top of the regime’s most wanted list. Since then he has been held incommunicado in a secret location inside Ethiopia. His “crime” is the same as hundreds – perhaps thousands – of other’s: publicly criticizing the ruling party of Ethiopia and its brutal form of governance.

Born in Ethiopia in 1955, Andergachew arrived in Britain aged 24 as a political refugee. He is a British citizen, a black working class British citizen with a wife and three children. Despite repeated efforts by his family and the wider Ethiopian community – including demonstrations, petitions and a legal challenge – the British government (which is the third biggest donor to Ethiopia, giving around GBP 376 million a year in aid) has done little or nothing to secure this innocent man’s release, or ensure his humane treatment while in detention.

After nine months of official indifference, trust and faith in the British Foreign and Commonwealth Office (FCO) is giving way to cynicism and anger among Tsige’s supporters. Is the FCO’s apathy due to his colour, his “type” or “level” of Britishness? Is there a hierarchy of citizenship in Britain? If he had been born in England to white, middle class parents, attended the right schools (educated privately as over half the British cabinet is) and forged the right social connections, would he be languishing in an Ethiopian prison, where he is almost certainly being tortured, abused and mistreated?