A Writer of ‘Timely and Universal’ Subjects 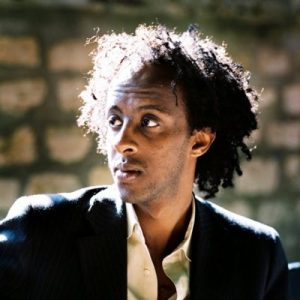 “Dinaw Mengestu is a novelist of great power whose subjects are both timely and universal,” said Professor of English Elizabeth Graver. “He writes about college campuses, the young and old, about love, revolution and the longing for justice. He writes about Ethiopia, Uganda, the American Midwest, New York, Washington, DC. He once said that novels ‘exist to complicate and expand upon our understanding of the world.’

“This is something his own novels – so full of both depth and reach – have done for me in profound ways,” she added. “My hope is that students of literature, creative writing, and African and African Diaspora Studies will find similar inspiration in his books and visit.”

Since his bestselling 2007 debut novel, The Beautiful Things That Heaven Bears, Mengestu’s work has earned him prestigious accolades, such as the Guardian First Book Award, the National Book Foundation’s “5 Under 35” designation, and a 2012 MacArthur Fellowship.

Born in 1978 in Addis Ababa, Ethiopia, he immigrated to the United States at age two with his mother and sister to join his father, who had fled Ethiopia during the Red Terror. A graduate of Georgetown University and Columbia University’s MFA program in fiction, he was the recipient of a 2006 fellowship in fiction from the New York Foundation for the Arts.

In his first and two subsequent novels, How to Read the Air and All Our Names, Mengestu channels the formation of identity as connected to the immigrant experience.

“All three of Dinaw Mengestu’s novels are about people who, for various reasons, come to this country and fashion new lives,” wrote Malcolm Jones in the New York Times Sunday Book Review.

But “while questions of race, ethnicity and point of origin do crop up repeatedly, they are merely his raw materials, the fuel with which he so artfully — but never didactically — kindles disruptive, disturbing stories exploring the puzzles of identity, place and human connection.”

Mengestu’s novels and nonfiction pieces, according to the MacArthur Foundation, “open a window into the little-explored world of the African diaspora in America. He composes tales distilled from the experience of immigrants whose memories are permanently seared by escape from violence in their homelands.”

In an interview with Deutsche Welle (Germany’s international broadcaster), he described his novels as “very closely related, not necessarily because the characters or the settings are the same, but because the ideas are similar and revolve around dislocation. What is it like to lose the things that you value most in your life, your family, your country, your friends? What happens to the person who has lost those things; how do they rebuild themselves?”

Mengestu has written for Rolling Stone and Harper’s, among many other prominent publications, holds the Lannan Chair of Poetics at Georgetown University, and is on the faculty of Brooklyn College.

His most recent novel, All Our Names, set in the American Midwest, alternates between narrators Isaac (an African exchange student) and Helen (an American social worker assigned to work with him), and interweaves disparate tales of naming, loving and belonging.

“Mengestu’s depictions of the loss of culture, community, and landscape endured by immigrants in America are broadening the thematic concerns and voices encompassed by the American novel,” according to the MacArthur Foundation.

For more on Mengestu’s public lecture at BC, see www.bc.edu/lowell.