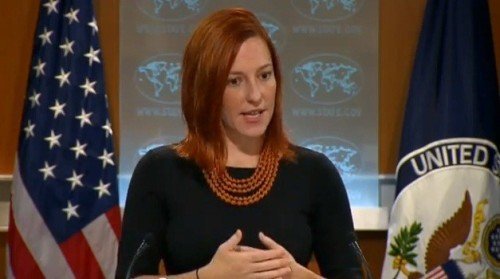 WASHINGTON, USA -Jen Psaki, State Department spokesperson, acknowledged at a news conference in the capital, that the US policy toward Cuba in 50 years has failed.

It did not work for our national security or for the people of Cuba, Psakisaid and added her government is hopeful on the dialogue is holding with Cuba.

She said that, in a new stage of relations, the two countries will have economic and national security benefits.

The US diplomat said that there is much work yet to be done as to achieve normal relations and stressed the importance for her country to approach Cuba in the context of Latin America.
When questioned by the press about the demand of Cuba to be removed from the list of states that sponsor of terrorism, she said it is a process in which the State Department is working and has not yet ended.

[S]imilarly, Psaki said about the banking situation of the Cuba Interests Section in Washington her government is trying to find a bank that will provide the necessary services to the embassy, but tersely noted that “it depends on private institutions It is their decision.”

It is expected that at four in the afternoon, Josefina Vidal, director general of the United States of the Cuban Foreign Ministry and Roberta Jacobson, assistant secretary of state for Western Hemisphere affairs, offer a press conference at the State Department on the talks held today.