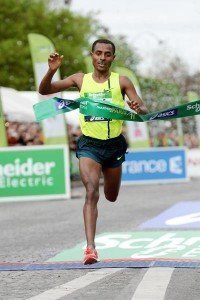 DUBAI- Kenenisa Bekele, world record holder over 5,000 and 10,000 meters, is aiming for Marathon gold at the 2016 Olympics, although the Ethiopian on Sunday said he could yet switch back to a shorter distance at the Rio de Janeiro games.

He may not be a household name like compatriot Haile Gebrselassie or Britain’s Mo Farah, but the softly spoken Bekele is one of athletics’ true greats, with three Olympic golds and more than a dozen world titles to his name.

Yet for all the accolades, the 32-year-old’s determination remains undimmed and he wants to make a similar mark on the marathon.

“There’s nothing left for me over 5,000 and 10,000 meters, so the marathon is very important for my career — it’s a new challenge,” Bekele told Reuters in Dubai.

“The marathon is a different race — you have to run a steady pace from the beginning.”

Bekele broke the Paris Marathon record on his debut over the distance, clocking 2:05:03 in April, while a time 48 seconds slower at October’s Chicago Marathon placed him fourth behind Kenyan trio Eliud Kipchoge, Sammy Kitwara and Dickson Chumba.

January’s Dubai Marathon will be his third 26-miler.

“I want to run for the record, but I don’t think I can make that on my third marathon – it’s very tough,” said Bekele.

“Dubai is a flat course and there’s a possibility to run a fast time, but the weather is a little bit hot.”

Unlike stadium-based races, marathon courses can differ greatly and it was only in 2003 that athletics’ governing body ratified a world record, rather than a world best for the event.

Almost two minutes have been shaved off the record since then, begging the question as to whether men could go below two hours. Bekele doubts it — at least by today’s athletes.

“I don’t think human beings can do that, but maybe a new generation in the future… maybe in 10 years,” added Bekele.