In April 2011, I traveled to Ethiopia on a humanitarian mission with non-profit organization Helping Other People (HOPe). With my husband and a colleague we traveled to the northern Amhara region to assess an HIV/AIDS education and development project that HOPe funded. While there we witnessed crushing poverty in cities and rural villages and encountered hope and strength in the people we worked with. 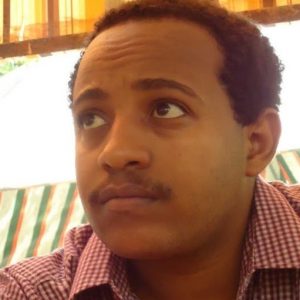 It was in Bahir Dar where I first meet Betre Yacob. He was working as an Information, Education and Communication Coordinator with an international NGO on HIV/AIDs programs, and for the rights of women and children. Betre, a graduate of Bahir Dar University and I connected instantly when he told me he also worked as a journalist and had just started a new blog. His focus was poor people and the government’s views on human rights in Ethiopia. We stayed in touch and every few months I’d receive an article and share it with HOPe and other media colleagues. At times the articles would be in English and other times they’d be in Amharic. I’m not sure when it started but sometime in 2012 the links would arrive blocked or the stories blacked out. Then Betre told me he decided to leave the NGO because his articles were drawing unwarranted government attention and he did not want the organization to suffer any negative effects. He had decided to become a journalist full time.