Witness the festivals of Ethiopia 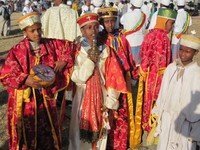 Easier
September 5,2014
Specialist operator Travel The Unknown is offering the chance to witness the extraordinary festivals of Genna and Timkat in Ethiopia, ‘The Cradle of Civilisation’.

The country is home to the Ethiopian Orthodox Tewahedo Church, one of the oldest orthodox churches in the world and with over 40 million members it is also the largest; it is also a founding member of the World Council of Churches.

The journey begins in Addis Ababa with a tour and a visit to the Merkato, the biggest open air market in Africa where you can buy everything from 15th-century, wood-bound Amharic bibles (the authenticity of which is possibly up for question) to the colourful circular baskets which the locals use to transport their injera – the spongy bread staple of Ethiopian cuisine.

At midnight there will be a chance to visit one of the Addis churches to witness the pilgrims draped in white robes, and listen to the spiritual singing Kidase; this is the Eve of Genna – the orthodox Christmas which is celebrated on 7 January.

After visits to St. George Church Museum and The Ethnographical Museum the next port of call is Bahir Dar; it is reached via the 13th century monastery of Debre Libanos and the Blue Nile Gorge (the Ethiopian Grand Canyon), before enjoying a boat trip on Lake Tana, Ethiopia’s biggest lake and home to the 16th century Ura Kidane Mhiret, one of the many monasteries situated on the islands on the lake.