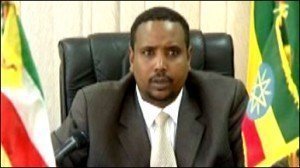 According to intelligence sources, Abdi Iley was behind a deliberate killings of civilians from Isaaq clan and participated with Puntland’s grasping ways of forming an alliance called Hilal which is connecting Jigjiga to Garrisa and Garowe, and curving NFD from the rest of Kenya. This action unversed Kenyan government, which already blamed Abdi Iley for chains of abducts and killings of ONLF officials within Kenyan soil.

Abdi Iley, who is the founder of Special Police ‘Liyu’ in Amharic, was allegedly corrupted the administration’s budget and helped ONLF by forcing many local people including the powerful Ogadeni diaspora to turn against the Ethiopian federal government.

While most local people think that he is two-bit punk puppet of the Ethiopian TPLF, some ONLF fighters such as the Commander of ONLF head-quarters, Abdikarim Sheikh Mouse, aka Qalbi- Dhagax or ‘Heart-stoned’ quotted as saying that he is helping ONLF turning all people against Ethiopia even the people in the middle is soon to jump and fight against Ethiopian regime”, during his short stay assignment at Q4, Djibouti in 2009.

President Abdi Iley empowered his own militia of Liyu Police and ordered killing officials from the federal government a number of times including officials killed between Ararso and kebribeyah, the demise of the Ethiopian officials was responsible by the 16th regiment commanded by Major (Shi’aqe) Faysal La’ah Adan Hirad.

He preached a televised hatred verbal abuse against Amhara saying fear not Tigray, as Tigray is no longer opposes our full Independence, but fear the return of Amhara, who has no desire our value and well-being as well as our future Independence.

Mr. Omar addressed to many diaspora people including those in Djibouti, during his meeting with them at Club Ethiopia near the Ethiopian church he told the people that full Independence of Ogaden is inevitable, but the way ONLF leadership is following is not the good option.

Abdi Iley did not hide his secret vision to see an Independent Ogaden state from Ethiopia, he boastfully said many times that he is the truer ONLF, which simply encouraged many ONLF sympathizers to continue their allegiance to the group.

President Abdi does not like to be solved the Ogaden Problem with Ethiopia through dialogue , he does not believe that Ethiopians are negotiable, to realize his vision he sent his own colleagues to Nairobi to stir up the peace-talks between ONLF and Ethiopia in October Last year.

The president’s recent activities to form a rebel group against Ethiopia was come to be known when former ONLF fighters under his command were arrested in Hargeisa along with FM radio equipment as the Somali version of Waagacusub Media reported.

Abdi iley told his friends that he regards himself as the John Garang of Ogaden region and will soon liberate Ogaden from the rest of Ethiopia, which is contrary to what Liyu Police think about him. A Liyu police fighter said, “if the ONLF orders Abdi-Iley to eat dog excrement, Abdi iley eats it.”