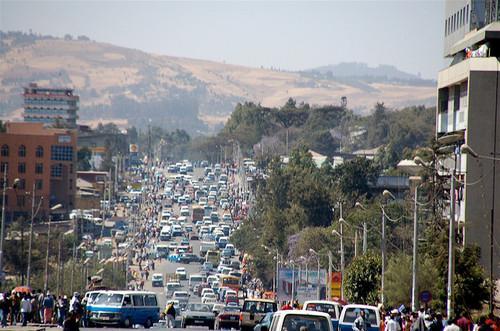 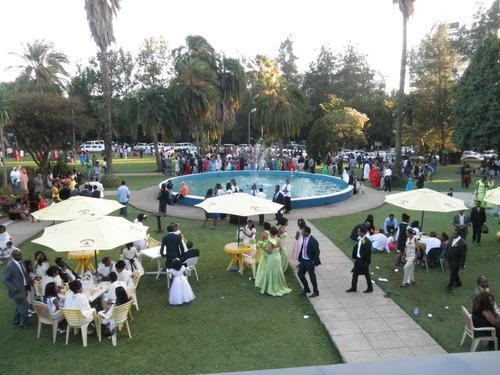 Before I actually went to Ethiopia, my only mental images of it came from the devastating famine there back in the 1980s. The one that led to a permed Sally Struthers begging for 70 cents a day from a dusty landscape. The one that inspired the 1984 Band Aid hit “Do They Know It’s Christmas?” and USA for Africa’s “We Are the World.”

So I was surprised, like any other ignorant tourist, to find something very different from the dirt-hued, fly-filled images that came to American televisions during that time. While Ethiopia still has more than its share of woes (low life expectancy, poor sanitation, low literacy rates, brain drain, and so on) it is vibrant, lush, and colorful.

My father and I took a trip there in early January, when many businesses still had their Christmas lights up (Ethiopia’s population is at least two-thirds Christian, so they do, indeed, know it’s Christmas, thanks very much.) Before setting out for the ancient city of Axum and the rock-carved churches of Lalibela, we spent two days in the capital of Addis Ababa.

We stayed at the government-owned Ghion Hotel, which boasts rooms out of your worst roadside motel nightmares. While doing my usual paranoid bedbug check, I heard the sound of drums and horns coming from outside.

In spite of its humble indoor scenery, the Ghion maintains vast, beautifully manicured gardens. These gardens are a popular spot for wedding parties to do their nuptial photo shoots, and many do so at once, rotating through the garden’s most photogenic spots in a surprisingly orderly fashion.

When I wandered outside to investigate, some 15 wedding parties had gathered in the gardens. And if not for the traditional band parading through the palm-tree-lined path, it could’ve been prom season out there. In fact, the scene was about as far as you could get from those ’80s famine relief commercials.