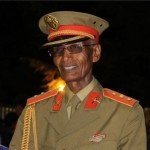 The Ethiopian Heritage Society of North America (EHSNA) would like to invite you all to come and celebrate with us, Captain Guta Dinka, who will be our special guest as part of our annual heritage program. The story of Captain Guta Dinka is a remarkable story that must be told for generations. His instrumental role in saving Nelson’s Mandela’s life from assassination is a striking story that every Ethiopian should be proud of, and should be etched in Ethiopia’s history forever.

As the tyrannical apartheid government became increasingly vicious in its crackdown against dissent, the young Nelson Mandela had secretly travelled to Ethiopia for military training. During his stay in Ethiopia, two men were covertly assigned to protect him. Of these two men assigned to protect him was 35 year old Captain Guta Dinka who was selected out of 4000 police officers. Nelson Mandela was purposely made unaware of their assignment for security reasons, and during his training, the two assigned officers would keep an eye on him from afar looking for potential dangers.

Then one day, Captain Guta Dinka was approached by a couple of foreigners who attempted to bribe him into helping them assassinates Nelson Mandela. They offered $2000.00 and gave him detailed instructions. Captain Dinka patiently listened to their proposition, and reported them to his superior officer the next day, upon which the two foreigners were immediately apprehended and deported from Ethiopia.

Captain Guta Dinka’s simple act of duty is exemplary. His actions reflect duty, integrity, and honor which has always been the ideal Ethiopian trait. At a time where these traits have been largely forgotten in out society, it is imperative that we appreciate and honor a rare gem. So come and celebrate with us and hear his personal account of how the assassination was foiled.

The EHSNA is honored to have him as our special guest at out 4th Annual Summer Festival that will be held from July 25th to the 27th. Captain Guta Dinka will be our special guest along with our guests of honors for this year. They will all present at the opening ceremony which will be held at 1 Veterans’ Plaza in Silver Spring, Maryland on Friday July 25th, 2014 from 5pm, and for our two day events will be held at Georgetown University Sport Complex where there will be entertainment, food, and sports.