(BBC Sport) Ethiopia’s Kenenisa Bekele saw off the challenge of Wilson Kipsang to take victory at the Great Manchester Run.

World and Olympic 10,000m champion Tirunesh Dibaba earned a comfortable victory in the women’s competition, finishing the 10km course in 31:09. 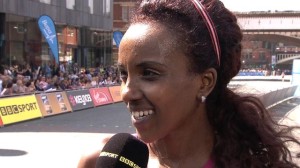 Britain’s Gemma Steel was second, more than a minute behind Ethiopian Dibaba.

Polline Wanjiku closely challenged Steel on the line, but vocal support saw the 28-year-old run home ahead of the Kenyan in 32:10.

“That really lifted me, I was fighting for that silver and it’s good to see that I can sprint when I have to,” Steel told BBC Sport.

“It’s good to establish myself in these races again, I feel at home in them. To come back and finish behind Dibaba, who is the best in the world, you can’t complain about that.”

Three-time Olympic champion Bekele, making his British 10k road debut, was matched by Kipsang until the closing stages but a late burst of acceleration in the final 400m earned him victory. South African Stephen Mokoko was third.