Independent Magazine in Ethiopia Shut Down

By Betre Yacob
One of the few independent Ethiopian magazines, Ebony, has been shut down after 6 years of publishing, putting many full-time and part-time workers out of a job. Tessema Dessalgn, the shear holder and editor in chief of the magazine, told to journalists today that they had closed the magazine because of exaggerated tax. 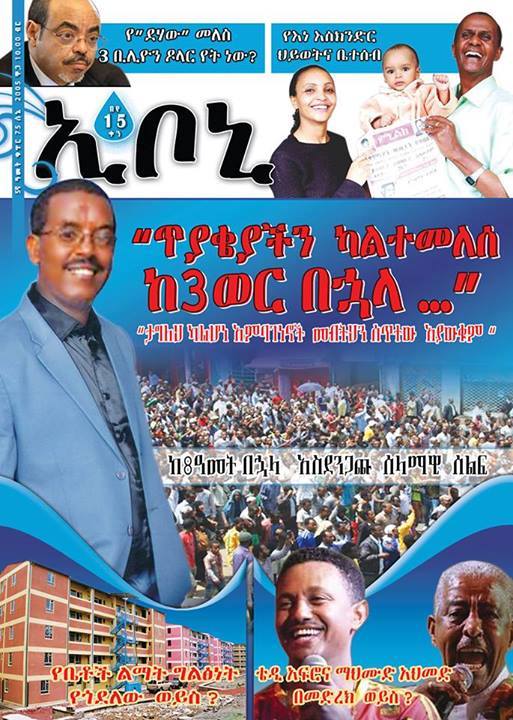 “We hadn’t other option but to shut down the magazine” Tessema told to journalists. “The tax was so exaggerated, and impossible to us to manage. We didn’t have even the half of the requested amount”, he explained. Tessema said that the tax had come while they had already been in a serious financial fall caused by the alarmingly rising cost of paper and other printing materials.

Ebony was one of the magazines circulated at national level, and known for its political, social, and entertainment stories. It began operating 6 years ago focusing only on entertainment. It exclusively began covering political issues in 2012.

Journalists working for Ebony were also the main target of the authorities. They used to be subjected to harassment, humiliation, and other serious violence as a result of their job. For instance, the former Editor in Chief of the Magazine, Bisrat Woldemichael, was kidnapped and beaten by 4 armed intelligent and security agents on 28 August, 2013.

The exaggerated printing price is not the only challenge the independent publications are facing in Ethiopia. The government imposes exaggerated tax too on them. For instance, in a recent case, 143,000 ETB was imposed on a local newspaper, Ethio-Mihidar. The amount is equivalent to its annual gross revenue.

The alarmingly increasing printing price and exaggerated tax are seriously smashing the independent private publications in Ethiopia. It is paralysing them causing them to serious economic crisis, and is forcing the weak ones to get out of the market.