(Cairo,Asharq Al-Awsat)—Addis Ababa confirmed on Wednesday that it is ready to open talks with Cairo on its Renaissance Dam project, following news that Egypt has formed a special legal committee to look at the possibility of securing international arbitration over the issue of Ethiopia’s Grand Renaissance Dam.

Talks between Ethiopia and Egypt broke down in January amid technical differences of opinion over the affect that the dam will have on Egypt’s share of Nile waters. Cairo claims that the construction of what will be Africa’s largest dam will have a significant effect on the flow of the Nile River, although Addis Ababa says that such fears are over-exaggerated. 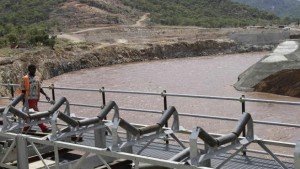 efforts to build trust among all riparian countries,” adding that “Egypt has continued to engage in negative campaigning against the Grand Ethiopian Renaissance Dam.”

Speaking at a ceremony held to mark three years since construction of the dam started, Tegenu criticized Cairo’s attempts to politicize the action of a panel of experts tasked with studying the dam’s potential impact on downstream states.

“Egypt is determined to delay the tripartite engagement by withdrawing from the Ethiopia, Sudan and Egypt forum,” he said, adding: “We urge Egypt to re-join the engagement and work for the benefits of our countries. “

Egypt’s Foreign Ministry on Monday confirmed that Cairo’s stance towards the controversial dam project remains unchanged. Foreign Ministry spokesman Badr Abdelatty issued a statement saying that “Egypt’s stance towards the Ethiopian Renaissance Dam is clear and there is no room at all to waive or risk endangering Egypt, because the issue is considered a national security one.”

Abdelatty added that Cairo has a plan to tackle the crisis, saying it is “gradually being implemented.” That plan covers the political, legal and technical aspects of the dam, he said, adding that it aims to push for “serious negotiations” to guarantee the interests of all riparian states.

Egyptian Foreign Minister Nabil Fahmy spoke with EU foreign policy chief Catherine Ashton about the Egyptian–Ethiopian dispute before the start of the EU–Africa summit in Brussels on Tuesday. The summit began on Wednesday, with Fahmy expected to discuss the dam project with his Ethiopian counterpart, Tedros Adhanom, during the two-day conference.