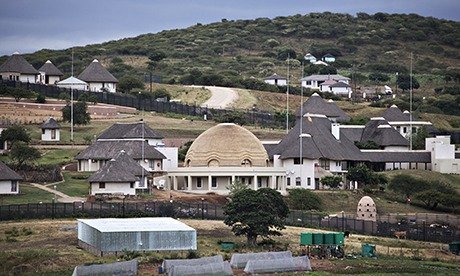 (theguardian) Jacob Zuma, the president of South Africa, faced calls for his resignation on Wednesday after an anti-corruption watchdog found 246m rand (£13.73m) of taxpayers’ money had turned his private home into a display of “opulence on a grand scale” amid a sea of poverty.

The damning report, which follows a two-year investigation, accused Zuma of unethical conduct and told him to repay the costs of a swimming pool, amphitheatre, visitor centre, cattle enclosure and chicken coop built as part of a state-funded security upgrade.

The findings are damaging blow to the president, whose career has been dogged by graft and sex scandals, just seven weeks before Zuma’s African National Congress ( ANC ) goes into the most hotly contested election since the end of apartheid 20 years ago. The opposition demanded his impeachment. Read full story on theguardian…