Shoot to kill them : Kenya loses another Eastern Black Rhino 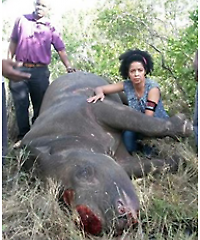 yesterday afternoon of an emotional Dr. Paula Kahumbu next to the body of the latest Eastern Black rhino kill in Kenya. Paula, who launched the global campaign ‘Hands off our elephant’ in Kenya last year will not mind to see that also extended to the rhinos of Kenya and East Africa, as in ‘Hands off our rhinos’.

Said Paula on her Facebook page in several comments retrieved just now:
black rhino murdered in Ol Pejeta by a gang of complete *-*****

Kenyans from different sectors mourn the murder of Sheria [Kiswahili word for Law] whose name did not help him.

The Kenya Wildlife Service and law enforcement agencies are coming under increasing pressure in Kenya to step up their investigations and use all available tools to bring poachers to justice, while the Kenyan judiciary, only recently was Kenya’s Chief Justice and Director of Public Prosecutions reported to have had a meeting with Paula to discuss prosecutions and sentencing issues, must now step up and hand out maximum fines and maximum prison terms to those taken to court and found guilty. (Only yesterday did news break in Kenya that some poachers were released on bail worth one million Kenya Shillings prompting questions how poachers could raise such amounts and added demands that no one accused of poaching should in fact be granted bail until the trial is over)

‘I am not advocating for extra judicial killings of suspected poachers but must also say that I admire your president (President Yoweri Kaguta Museveni of Uganda) when he recently directed straight forward that poachers should be shot dead on sight. They must know now that going into parks and conservancies with intent to poach must cost them their life to prevent this plague spread further’ said one of those who was all for the shoot to kill policy while another added, on condition of anonymity ‘… and screw those civil rights activists. Where are they when our elephant and rhinos are poached, where are they to demand that the animal rights are upheld also. I want to see one of those mouth off in public when poachers get shot and I shall slap them hard across their faces and am ready to then be charged for assault, if any of them even dares to sue me’.

Emotions are clearly running high in Kenya now over the poaching tsunami which came rushing up from South Africa, where last year 1.004 rhinos were killed. In East Africa the numbers since last year run into a few dozens, but sadly with a growing trend and signs of total impunity.

Two rhinos were killed over the past few weeks in the highly protected Nairobi National Park, under the noses of the KWS top management as their head office is at the main gate to that park while last week reports emerged from Kenya that several rhinos were killed in the equally protected Nakuru National Park, raising more and more questions just how prepared and KWS is and how ready to engage they are at this stage.

Private conservancies have made sure that their armed rangers are members of the police reserve, officially sanctioning them to bear arms and engage poachers while on patrol, and while some of the criminals were shot dead in recent months on or near conservancies it appears that there are still more out there who need to be identified and brought to justice, or else be killed too when engaging in shoot outs with rangers and regular police. Watch this space for breaking and regular conservation news from across Eastern Africa.