(The Telegraph) Under the mid-morning sun in Ethiopia, a van loaded with bottles of water was being besieged. The workers inside it, unable to dispense bottles quickly enough, had to resort now and again to sliding the windows shut, only just avoiding the reaching fingers. Outside, jumping, jostling people were accidentally elbowing one another in the ribs or the face. But all the while they were grinning. 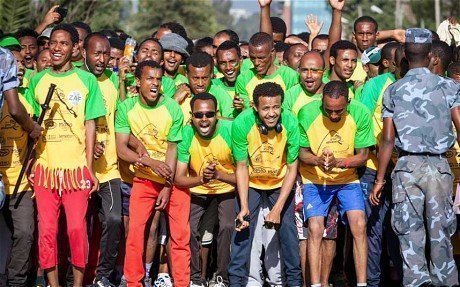 It was Sunday, November 24, 2013, and the people outside the bus, medals on red chains hanging over their yellow-and-green T-shirts, had just played their part in the biggest mass-participation athletics event in Africa. They had finished the Great Ethiopian Run, a 10-kilometre race at 7,500ft through the streets of Addis Ababa that had attracted 37,000 entrants. They were a little thirsty, but they were jubilant too, and on my second outing as a fun runner in Africa I was glad to be among them. I had gone to their city partly to lay to rest some ghosts.

I’ve been a runner for most of my life, though not a competitive one. I run to keep fit, to clear my head, and for the love of it. On trips for Telegraph Travel, I’ve pounded pavements in cities from San Francisco to Melbourne. In 1992, at the end of a safari in Kenya, I took part in a 10km event in the steamy heat of Mombasa. One moment, near the finish, I was running, the next moment I was in an ambulance. Read more on The Telegraph…