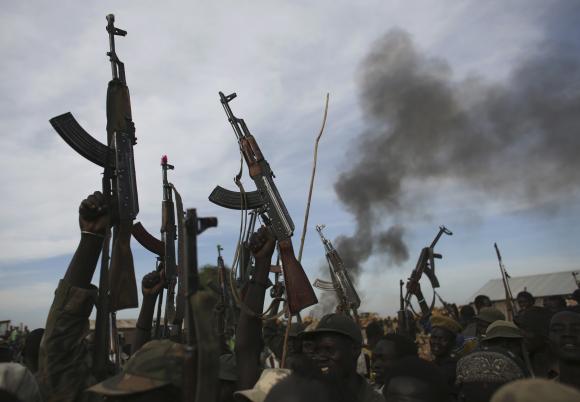 (Reuters) – South Sudan’s government troops and rebel forces have committed serious abuses that may amount to war crimes during fighting in two oil-producing regions, with patients too weak to flee shot in their beds, according to rights and humanitarian groups.

“A clear pattern of reprisal killings based on ethnicity, massive destruction, and widespread looting has emerged in this conflict,” Human Rights Watch (HRW) said in a report released on Thursday.

“Malakal is deserted, with houses burned throughout and countless dead bodies strewn in the streets,” said Carlos Francisco, MSF’s emergency coordinator in Malakal.

MSF staff found hospital patients who had been executed in their beds in Malakal, he said.

Thousands have been killed and more than 800,000 have fled their homes since fighting began in South Sudan two months ago, triggered by a power struggle between President Salva Kiir and Riek Machar, his former deputy whom he sacked in July.

The warring sides signed the ceasefire on January 23 to end weeks of fighting but sporadic clashes have continued.

The fighting in Malakal, capital of the main oil-producing Upper Nile region, was the worst since the ceasefire. The town is now divided between the army and rebels.

Troops from both sides have extensively looted and destroyed civilian property in Malakal and Bentiu, the oil hub of the nearby Unity state where they also targeted civilians and carried out extrajudicial executions, “often based on ethnicity”, HRW said.

Kiir is from the dominant Dinka tribe, while Machar is a Nuer.

Oil production ceased in Unity state because of the fighting, and national oil production had fallen by a third to about 170,000 barrels per day since December.

The Upper Nile state minister for information said fighting was still going on in Malakal.

The violence has cast doubts over the peace talks in Addis Ababa, which have already been delayed by rebel demands for the release of four political detainees held by the government on suspicion of plotting a coup alongside Machar, and the withdrawal of Ugandan troops from the country.

Officials at the negotiations say the rebels will now demand that President Kiir step down pending a timeframe for elections.

Officials from the South Sudan government delegation at the talks were not available to comment on the proposal.

On Thursday, government officials said around 150 people died in Upper Nile region when rebels opened fire on a boat carrying people escaping the fighting as it crossed a river. Rebel officials were not immediately available to comment.