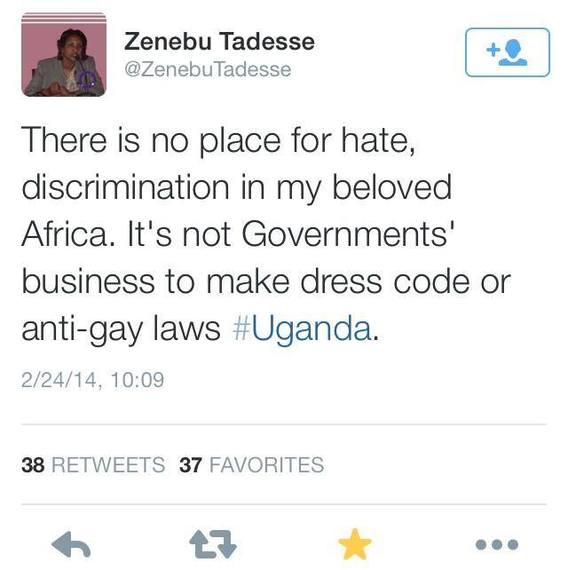 Tadesse tweeted: “There is no place for hate, discrimination in my beloved Africa. It’s not Governments’ business to make dress code or anti-gay laws #Uganda.”

The tweet came shortly after Ugandan President Yoweri Museveni signed a harsh anti-gay law that punishes gay sex with up to life in prison.

Reacting to the news, Ugandan LGBT rights advocate, Frank Mugisha, told me that he very much welcomed Tadesse’s statement.

He said: “this will help. We need as many possible African voices speaking against this law.”

While activist Melanie Nathan, a native of South African commented: “This is hugely significant statement coming from an accomplished and respected African Minister.

“I believe that many more Africans of noble esteem probably believe that which she has had the courage to speak,” asking others to show equal courage and follow her lead.

Nathan added that she is “especially disappointed that we have yet to hear officially from South Africa’s President Zuma, from the only country in Africa where there is a fully equal constitution.”

She said he should follow Nelson Mandela’s legacy and Tadesse’s lead.

Ethiopia has already a harsh anti-gay law which punish same-sex acts with up to 15 years imprisonment.

In addition, under its anti-terrorism law anyone who states what the government deems terrorism (which can include human rights criticism) can be imprisoned for 20 years, without a warrant.

Ethiopia’s anti-advocacy law bars charities and nongovernmental organizations that receive more than 10 percent of their funding from abroad from participating in activities that advance human rights and the promotion of equality.

Essentially these three laws taken in total make it impossible for any health-services, charity, advocacy or even clubs or bars to openly support or cater for Ethiopia’s LGBT population.

Like in Uganda a strong Evangelical lobby along with other religious leaders have been campaigning for an even tougher capital punishment against LGBT Ethiopians.

Mercy (pseudonym to protect his identity), director of the underground Rainbow Ethiopia, a health and support group for Ethiopian LGBT people, told me he welcomed Tadesse’s statement, which he called “progressive.”