Morsi tells Sisi: You shall be brought to account and severely punished 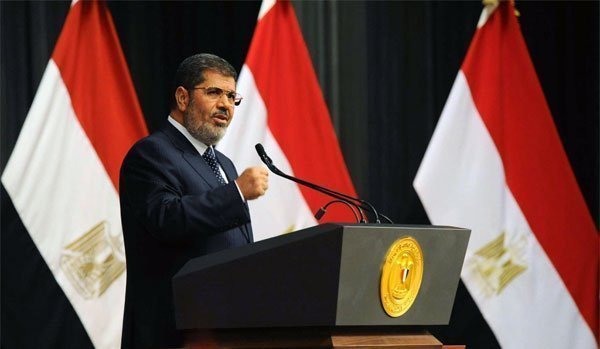 President Mohammed Morsi was today permitted to make a statement from within the detention cage inside the court, which is presided over by Judge Sha’ban Al-Shami, the head of Cairo criminal court – which is looking into the case of the storming of Wadi Al-Natroon Prison. He said: “Abdul fattah Al-Sisi, who presides over the military coup d’etat that took place in the country will be called to account before God and will also be tried before the entire people who will show in mercy to him. He will be punished several for what he did to the country. He mobiles the military, the army, inside the country without permission from the supreme commander of the armed forces. This is considered an abhorrent crime committed against this people.”

The president sent his greetings to the Egyptian people saying: “My greetings to the entire people. I would like to say to you continue your peaceful demonstrations. I am with you. We shall prevail despite the conspirators who are allied with the Zionists.” This is what the Middle News Agency reported.